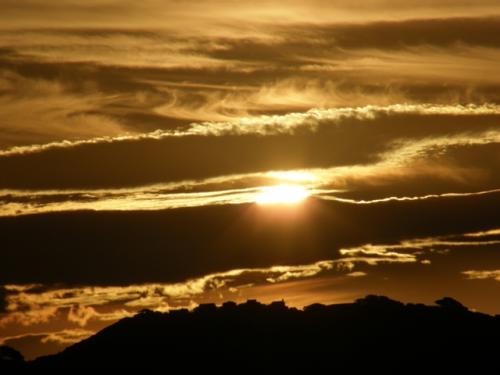 The shortest day of the year was almost a month ago exactly (isn’t this year flying by?) – and the earth is slowly shifting back to allow more sunlight into the Southern Hemisphere.

In Auckland the sunrise time has shifted from 7:34am on the shortest day to 7:30am today.  Not exactly a huge change but some may notice the slightly lighter glow in the morning.

For those stuck in traffic after work you’ll notice the later sunset time even more.  Auckland’s sunset has shifted from 5:12pm on June 22 to 5:25pm today.

This means Auckland now has 17 minutes extra sunlight per day compared to a month ago.  And the days are now getting longer by over a minute every day – or over 15 minutes a week.

At the other end of the country the days are also getting longer – but faster.  Due to the shape of the earth and the axis it’s on the South Island enjoys longer days in summer than their northern neighbours – but in winter the days are significantly shorter – especially the further south you head towards the South Pole.

In Dunedin sunrise times have shifted from 8:20am on the shortest day of the year, June 22, to 8:13am today.  Sunset times have changed from 4:59pm last month to 5:16pm today.  That’s an extra 24 minutes of sunlight compared to a month ago.  And days in the lower South Island are getting longer by almost 2 minutes a day – or just under half an hour a week.

Technically we are now entering the coldest time of the year for the next month – but with this warmer than average winter it’s hard to notice.

WeatherWatch.co.nz says extra warmth, added by the longer daylight hours, will become noticeable in less than 4 weeks time for most regions.

Definatly noticing the extra light at the end of the day, expecially when you’re rushing home to try get out for a surf at 5PM; just waiting on a new swell haha.