Day after Yasi: delay and despair 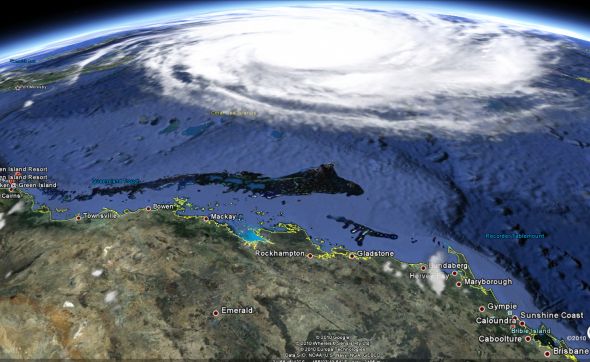 Yesterday was known as “the day after Yasi” for thousands of North Queenslanders.

On talkback radio and on the side of normally busy highways, the phrase emerged as locals stopped to share their experiences of Cyclone Yasi’s roaring winds and unrelenting rain.

Most escaped physically unscathed, but their homes and properties took a battering, although the state was largely spared the destruction that was first feared.

But Yasi still managed to disrupt tens of thousands of residents’ and visitors’ lives by blocking roads with debris – or in many cases water – and knocking out mobile phone towers and electricity supplies.

Some of the most disrupted areas were in Townsville and Ingham. The Bruce Highway was blocked in several locations, forcing many truckies, holidaymakers and locals to sleep in their vehicles on the roadside.

The lucky ones made it to motels that still had electricity, but they had to contend with a loss of cellphone coverage after a number of transmitter towers were flattened by the strong winds.

The situation looked set to remain that way for the next few days. Many who are normally called upon to repair the damage couldn’t get there themselves or had their own damaged properties to look after.

Sugar cane crops have been flattened and big trees have been uprooted and tossed aside. Even while it drizzled, the work of some was clear with tidy piles of palm fronds gathered beside the road.

In other streets, branches were scattered everywhere, blocking drains and sending water spilling onto the roads and down the sides of houses. The number of buildings with tape across the windows to reinforce against the wind increases the further north one travels.

Queensland’s many small roadside creeks became raging torrents and spilled over onto the roads. Locals were used to it – “Flooding risk” signs were a common sight – and big logs and other debris were carried along on the fast brown water towards bridges, forcing their closures until they are assessed by engineers.

There was talk of the Government having to airlift food to the worst-affected areas – just as it did in last months’ flood crisis – as trucks carrying foodstuffs were left idle on the side of the road.

One truckie spoken to by the Weekend Herald at a roadblock just south of Ingham said food supplies were already getting tight.

“It would be days since a truck’s got in there,” he said.

Panic buying hadn’t helped matters. South of the devastated towns of Tully, Mission Beach and Cardwell, items such as bread and milk were hard to find in the shops that had managed to remain open.

Queues formed at petrol stations as people did not want to risk long drives without a full tank – especially as there was no guarantee of finding another station open. Frustration threatened to boil over as people waited in muggy weather, but for all that there was little tension.

A woman at a roadblock said there had been plenty of warning that Yasi would cause chaos and danger, but she

After 5 months nothing is fixed ! Not one house!

I wonder if a Queenslander would put up with that !