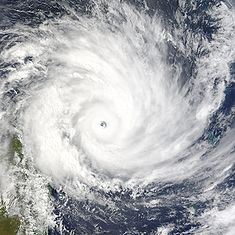 Towards midnight on Christmas Eve, Cyclone Tracy started to unleash its full fury on Darwin which made it a Christmas that will be forever be etched in the memory of those who survived it.

The city was close to being wiped off the map in just a matter of hours as not only extreme winds hammered the far northern city but torrential rain was also causing massive problems.

Wind speeds of 217 km/h registered at Darwin Airport before the equipment was itself blown away and there are estimates of maximum speeds of up to 300 km/h.

With so much destruction of both homes and infrastructure, the population of about 45,000 was reduced to about 10,000 by a mass evacuation of people to other Australian cities.

Many of the families that left never returned and the rebuilding attracted people from many different places resulting in a young, diverse population who rebuilt the city.

After the cyclone building codes were upgraded dramatically to try to prevent such extensive damage next time a cyclone passed by. And the rebuilding was largely done by the Housing Commission using only a limited number of designs on a large scale. At one stage nearly 90% of homes in Darwin were owned by either Government Departments or large national companies such as banks.

Up to this point Darwin hasn’t experienced winds of a similar nature to Cyclone Tracy but the city is well prepared to do battle if required.

Yes 41000 of the 47000 were left homeless. Most homes were substandard and many weren’t even tied to foundations.

There was a chilling documentary put out by the BBC called “When will the sparrows return”. There wasn’t a leaf left on trees for miles and this was the tropics.

Three in our small Northland district were involved with Cyclone Tracy, the other two with rebuilding and myself with getting some of the first supplies in. First and only time and at night I have ever landed in water with men standing on either side of the runway with torches as light markers.

Just as an aside, the last person to be found dead , Sandy McNabb, had invited me to share his house with him some 30kms south of the city. I would have been there except I decided to work till the end of the year in Melbourne.