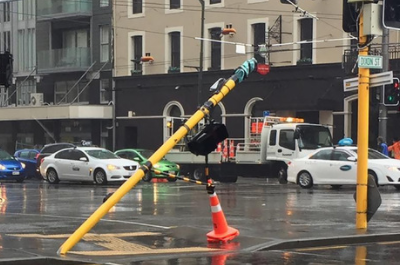 UPDATED – Damaging hurricane strength wind gusts have been pummeling Wellington this morning, with more wild weather across he country.

The Rimutaka Hill is now closed, trees are falling and roofs lifting as severe gales associated with an intense weather bomb bears down on central New Zealand.

More than 400 households were left without power and vital commuter services are starting to be affected as trolley buses are taken off the road and all harbour ferry crossings cancelled.

Rain and winds of up to 100km/h have been recorded across the capital with the worst expected to hit at 9am.

At present 280 houses are without power in the suburbs of Haywards, Belmont and Avalon. A further 152 remain in darkness in Stokes Valley, Heretaunga and Silverstream.

An early morning Jet Star flight JQ251 from Auckland took two attempts to land in the capital as winds of nearly 120 kph barrelled through the runway.

A video has emerged of grateful passengers on board the domestic flight clapping the pilot for his skill in getting the plane down safely.

A Fire Service spokesman said crews had been called to clear roads in South Wairarapa and Johnsonville after trees blocked lanes.

In Wellington three properties needed to have loose tiles and sheets of iron secured by firefighters.

A Korean church in Brooklyn had a tree crash on its roof.

Trolley buses have been taken off the road this morning due to the gale force winds and rush hour commuters are being told to expect disruptions.

Test trains have been sent out across the rail network and trains were not affected by the strong winds and rain at this stage.

Waves were crashing over the road on the main route to the airport.

While flights are running to schedule Wellington Airport is warning people to allow extra time to get to the airport and to check its website for any delays.

The New Zealand Transport Authority issued a warning to motorists about the wind danger if travelling on the Desert Rd this today.

The main routes across the South Island have been cut off after a number of slips and flooding blocked roads.

#Wellington at its finest #weatherbomb pic.twitter.com/4Bv2P9BPdK

Flooding has closed SH73 from Otira to Harris Creek, SH7 from Reefton to Greymouth.

SH6 between Westport and Greymouth has been closed by a slip blocking the road north of Barrytown.

Warnings have been issued on SH6 between Hokitika to Haast, Sh7 Kaiata to Greymouth and Sh 6 Mokihinui to Fairdown due to flooding and surface water.

The Lewis Pass has been closed due to slips and flooding.

Two cruise ships have been forced to change course this morning due to gale force winds forecast for Southland, and boaties being are warned to secure moorings in preparation for gale force winds.

Environment Southland harbourmaster Lyndon Cleaver said “the last thing we need is vessels breaking off their moorings and becoming a navigational hazard, or a significant cost to boaties.”

Passengers on two cruise ships will miss out on snapping the picturesque scenery of Fiordland, after both were forced to change course to avoid the area.