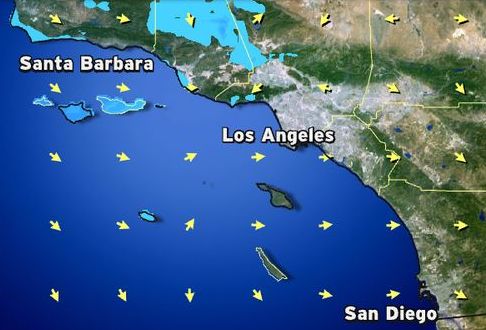 Following the hurricane force winds which caused widespread damage in California and eastern Los Angeles last week another major wind event is on the way.

The strong winds, known as a “Santa Ana  wind event” is shaping up for Southern California and it starts today.

Wind gusts last week topped 225km/h and some parts around LA are still without power.

This from our friends at Weather.com…

As one upper low departs for the Plains, another upper low is swinging south out of the Northwest and moving into Utah, Arizona, New Mexico and Colorado. This plus a strong offshore flow from high pressure over the Great Basin will be the new trigger for yet another round of feisty winds over Southern California early Monday through Tuesday.

Unlike last Thursday, these winds will have an easterly component instead of the destructive northerly winds that roared through the area behind a powerful cold front passage.

High Wind Alerts
The strongest winds will be in the mountains and valleys. Gusts to 100 to 110km/h will be possible in wind-prone locations. High wind alerts have been posted for Southern California.

From the National Weather Service in Los Angeles/Oxnard:

Winds could reach damaging levels in the mountains of Los Angeles and Ventura Counties…in the Valleys of Ventura County…and in the Santa Clarita and San Fernando Valleys. While winds may diminish for a while late Monday or Monday evening…they will likely increase again late Monday night and Tuesday morning.  (Times are US not NZ)

High wind impacts include, but not limited to: