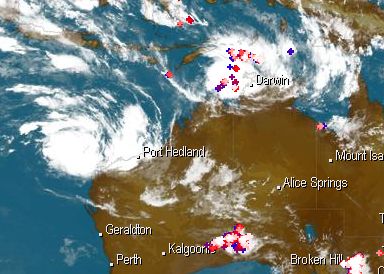 Darwin and the surrounds are being flooded by the biggest rain in several years as a monsoon low hovers over the western Top End.

Shoal Bay, just to the north of Darwin, gained 259 millimetres of rain in the 24 hours to 9am Tuesday, their biggest rain in 14 years.

Dum In Mirrie, Marrara and Noonamah all had their highest 24-hour rain totals in three years with 245mm, 191mm and 160mm respectively.

As much as 100mm fell as far south as Channel Point and Batchelor and as far east as Middle Point, making some roads impassable.

Darwin airport recorded 131mm to 9am, a one-year high.

With the low remaining slow-moving there is a good chance for another 200mm or more by 9am tomorrow, with potential for near 300mm. Wind gusts to about 85km/h are also possible.

In the three hours to midday, Dum In Mirrie has picked up another 70mm and Darwin 21mm.

The low is likely to move slowly north-northwest into the Beagle Gulf and possibly develop into a cyclone on Wednesday night or Thursday morning.

A cyclone watch has been issued.