Cyclone: So many meanings 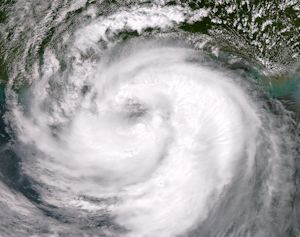 When someone talks about a “cyclone”, they can mean several different things.  Some of it depends on where in the world they are from.  It can also depend on whether they are using the general term or a talking specifically about one particular type of storm.

First of all, let’s start with the most general definition.  A cyclone is simply an area of low pressure.  The lower pressure is caused by the fact that air is rotating around the low whilst it spins inward.  Like water does when you pop the drain on your sink.

These are your general, every day “lows”.  These are shown as a big “L” on a weather map.  These are important factors in creating our daily weather.  This indicates lifting air, which means an unstable atmosphere which in turn, can lead to clouds and precipitation.  Air rotates around a cyclone in a clockwise direction here in the Southern Hemisphere.

A cyclone can also be a big storm.  Like Tropical Cyclone Evan.  But again, whilst these types of storms are all cyclones in that they are areas of low pressure, they don’t all qualify as “Tropical Cyclones” in the way the term is used in Australia and the South Pacific.  If the winds do not exceed 62km/h, then it is simply called a Tropical Disturbance, Tropical Depression, or Tropical Low.  When the winds are at 63km/h or greater, then it is called a Category 1 Tropical Cyclone.

That same type of system in US waters of the Northeast Pacific or North Atlantic is called a Tropical Storm, but it’s still a cyclone because it is still an area of low pressure.

After the winds exceed 118 km/h, it starts to get confusing.  At that point, the storm is on the higher end of the Category 1 Hurricane classification according to the US.  But in the northwestern Pacific it is called a Typhoon.  In the northern Indian Ocean it could be called a Very Severe Cyclonic Storm.  In the southwest Indian Ocean it would be called a Tropical Cyclone and in Australia and the south Pacific it would be a Category 3 Tropical Cyclone.

There are so many definitions of the term “Cyclone” and so many ways attempts have been made to classify cyclones, it’s enough to make you dizzy.