Cyclone season ready and set – but is our Government ready? 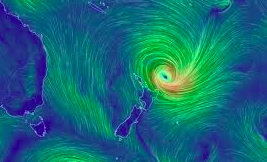 This year is anticipated to be more eventful than last year for Australia, which was the quietest on record for the Australian region.

Warmer sea surface temperatures to the north and east of Australia are expected to help boost cyclone numbers – this may also spill down to New Zealand. NIWA, however, says the risk this year is the same as always.

Australian forecasters say the outlook is for a near-to-above average number of cyclones in Australian waters, the average being 11 in their area of responsibility.

The Aussie area of responsibility ends in the mid Tasman, where it switches to either the Fiji or NZ Govt forecasters – yes, there are two different Government forecasters for our side.

It’s a messy set up for New Zealand with no one source tracking cyclones other than WeatherWatch.co.nz (unlike North America which has one Government body to cover all hurricanes in all North American nations).

For example when Cyclone Winston threatened New Zealand MetService said one thing, NIWA said another.  The following day they BOTH flip flopped and reversed what they said – in fact it was so confusing it was raised at a Select Committee meeting earlier this year in which the MetService CEO tried – and failed – to blame private forecasters and news media for their own Government botch up.

WeatherWatch.co.nz strongly disagrees that our Government should have two forecasters funded and owned by the taxpayer in times of deadly tropical cyclones.

But we appear to be a lone voice so have given up on fighting this – especially at a time when some in Government say poverty is a serious issue in this country yet at the same time these politicians turn a blind eye to tax dollars being wasted with two Government agencies being funded by you and I to work in the same space – something that does not happen in any other country on earth. A disaster may change this wrong Government set up – but for now WeatherWatch.co.nz uses trusted global sources instead.

The next 11 tropical cyclones to be named within the Australian region will be given the following names, in order (please note that storms that form east of the Tasman Sea are given different names not in this list).

My understanding is that Metservice NZ Officially have the sole responsibility for tracking Cyclones within their balliwick once Fiji and Australia are out of the picture . Niwa have no input at all apart from some commentary.

Am I wrong in this? Can you absolutely confirm that NIWA is an official forecaster for all the cyclones as well?

The word “official” means it is from a Government or Government agency. Yes, MetService is the quote “official forecaster” but NIWA is also a 100% Government owned agency and are putting out press releases about cyclones as an official Government Agency of the New Zealand Government or Crown.  No other country on earth does this.  If NIWA isn’t a reliable source it makes you wonder why on earth we as tax payers fund a second forecaster that isn’t as good as the “official” MetService. Either way this is a shambles – and New Zealand’s increasingly dumbed-down news media means there is absolutely no clear understanding about this. We can’t have two Government forecasters – and we can’t have them saying two different things in life of death situations…in our view.

You are right. The tax payer should not be paying for both NIWA and Metservice going after the same commercial dollar. NIWA is climate research and should stick to that. Metservice is NZ official day to day forecasting, warnings and cyclone tracking.
Each should maintain its prescribed course and not overlap.

Well WW you are the only ones I take any notice of during major weather events so keep up the fantastic work you do and ignore the other two lame ducks.
I would be sure I am not alone her either.