Cyclone likely to track east, and another to follow? 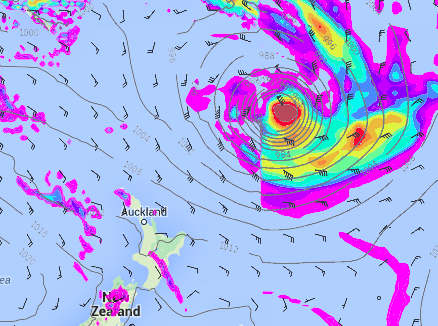 A significant tropical cyclone is likely to affect the tropics directly north of New Zealand over the next several days – but a direct hit to New Zealand is looking less likely thanks to building high pressure in the Southern Ocean.

Over the weekend computer models aligned a little more, placing the low just east of New Zealand when it moves down next week, with building high pressure over New Zealand itself it will make it very hard for the then ex-cyclone to turn in towards us making a direct hit.

However it will be very close offshore – and even if the weather is settled in New Zealand, swells and potentially deadly rips are likely right along our eastern coastline for a time, especially the North Island’s east coast from Northland to Bay of Plenty and Gisborne to Wairarapa.  Highest risk for rough seas will be between March 15th and March 19th.  Over the years WeatherWatch.co.nz has found a number of drownings or near drownings have been directly linked to offshore storms like this one, while the weather at our beaches may seem ideal for swimming.

This first cyclone may well hit Vanuatu, where some people are already evacuating out of choice. New Caledonia may not be so exposed, although the eastern islands may be.

Another cyclone after this one?
Another storm is likely to follow this low, this time forming to our north west over the Coral Sea and tracking SE towards New Zealand.  Coral Sea lows are actually often in a better position to reach New Zealand, but like the current developing storm, high pressure over New Zealand will be the main guiding factor when this second low comes down towards us in the final week of March…ie, a lot can happen between now and then.

The second potential cyclone looks much smaller in size too, but indicates the weather pattern has changed in our part of the world now that summer has ended.  “We are now seeing real life in the tropics, plenty of lows and cyclones forming over the next few weeks – and we hope it’s just a matter of time before everything lines up nicely to bring in a soaking sub-tropical rain event for parched farms” says head weather analyst Philip Duncan.

High pressure looks set to continue coming in from our west, from the south of Australia – but showers are in the New Zealand forecasts a little more often now as we creep towards April, which is usually a wetter month across all of the country.

– Regular cyclone updates this week and next, here at WeatherWatch.co.nz
– Image – the storm at its nearest to NZ next Sunday and Monday.

The tropics sure are firing up at the moment with a number either happening or about to happen. The models I have seen all seem to place it east of NZ but how close is really the question I guess. Opinion varies on that & until it moves south it will remain the million dollar question.

One thing has always intrigued me. Why do they have a desire to track south if they are in the southern hemisphere? Is it to do with polar force?

Hi Dave – good question, and it’s all to do with the spin of the earth.  All lows near the tropics move from east to west….lows near the poles travel the opposite – west to east (the bulk of the weather in NZ travels west to east in this flow).

Storms don’t cross the equator – they eventually pull away from the equator in both hemispheres, then head to the poles….this pulls the lows into a long curve usually.  So, for example, Atlantic hurricanes form near Africa, move westwards towards the Carribbean then curve north towards America, then north east off towards the UK.  In our part of the world they often turn to the south west, then the south, then to the south east and get pulled into that main west to east flow around New Zealand and Antarctica etc.

Once they pull off to the south east (or north east in the northern hemisphere) they usually speed up and fall apart – but can grow into a cooler centred storm (unlike the warm cored tropical storms) and in fact can have more widespread severe weather than a cyclone (but usually not so intense at the centre).

I assume they don’t cross the equator due to the need to spin the opposite way?? Just like water down the sink?

A very fascinating part of weather following is tracking these big storms. I am not a storm chaser as such but it is very interesting gathering the information and looking at predictions. The computer modelling these days is mind blowingly accurate when you consider all of the variables

Correct – actually if you think of the air as water it behaves in similar ways when you spin it and move it around. I find comparing the wind maps (highs, lows, storms etc) to like watching a large river flowing. If you’ve ever watched the Waikato or Clutha rivers you can see big areas of calm, and other swirling areas/eddies etc.  The air is very similar – and the mountains/ranges we have are like rocks/branches in the water. It’s all spinning and swirling as it moves along together as one big flow.