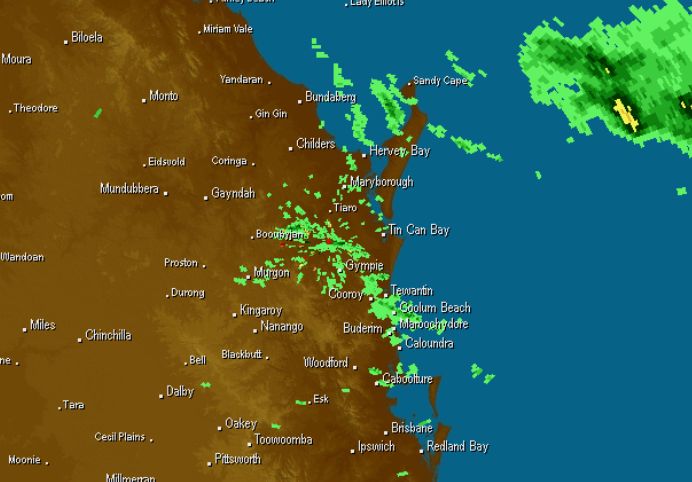 The cyclone threat has diminished for southeast Queensland following the heaviest rain in years, but warnings remain in place for damaging winds and flooded streams.

The last 48 hours saw more than 300mm of rain accumulate in southern parts the Wide Bay and Burnett, prompting flooding in a number of catchments.

Mount Wolvi, near Gympie, was inundated with more than 360mm in the 48 hours to 9am this morning, forcing the nearby Tinana Creek into major flooding. Goomboorian accumulated over 360mm in the same period, which included the site’s wettest day in nine years.

The heavy falls were triggered by a low pressure system, which directed copious amounts of moisture from the Coral Sea into the atmosphere over southeast Queensland.

Following the past two day’s rainfall, flood warnings remain in place for the Mary, Mooloolah and Maroochy catchments, as well as coastal rivers and adjacent inland catchments between Bundaberg to Caboolture.

Thankfully, the rainfall eased significantly overnight as the low moved away from the sodden coast. While there were initial concerns that the low could strengthen into a cyclone, this is now considered unlikely.

A severe weather warning does remains in place for damaging winds for Fraser Island, although these conditions will ease throughout the day.

Looking ahead, drier skies are expected to make a return for the region by the end of the week.

Another low is anticipated to develop off the coast of New South Wales on Thursday, which will direct a drier southerly airflow into southern Queensland. In contrast, heavy rain from this system is likely to affect coastal areas of New South Wales, eastern Victoria and Tasmania from Thursday to Saturday.