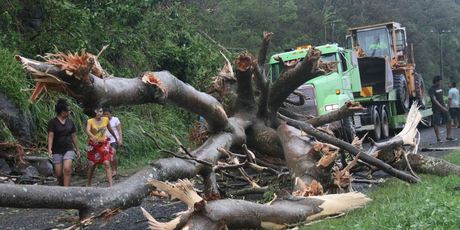 Cyclone Evan could develop into a category five monster by the time it hits Fiji.

Fiji Meteorological Service director Alipate Waqaicelua said the cyclone was still hovering over Samoa last night, with sustained winds of up to 170km/h, and brief gusts almost double that.

He said it would likely turn into a category four early today.

“It is expected to reach Fiji by Sunday afternoon as a category four and possibly a category five. At this stage there is nothing in its way to destroy its structure so it’s got everything favourable for it to develop further.”

Mr Waqaicelua said Tonga and Wallis and Futuna would likely be hit with gale-force winds but would probably be spared the full force of the cyclone.

Fiji’s Prime Minister Commodore Frank Bainimarama issued a statement urging every Fijian citizen to take the “impending disaster” seriously. “I call on you to secure your homes, your businesses and your properties. I also urge you to now stock up on emergency and essential items. Every Fijian must be prepared and not be complacent.”

“Fellow Fijians, I cannot stress enough how serious this is.”

In Samoa, the country’s Red Cross secretary general Tala Mauala said make-shift emergency centres had been set up in churches, schools, sports clubs and government buildings to accommodate about 3000 refugees who had been forced to flee their homes.

People kept arriving at the centres, particularly from low-lying areas and communities near overflowing rivers.

“It’s raining and getting cold, especially for the elderly and children. A lot of them said that all their stuff was taken by the floods so they came up with what they were wearing at the time.”

The Red Cross was giving out emergency supplies, collecting rainwater, repairing sanitation and distributing lanterns to people who remained without power.

Foreign Minister Murray McCully said Samoan authorities were coping “extremely well” with the situation and had not called on New Zealand for assistance, but help would be available at short notice if required.

None of the three dead was thought to be a New Zealander.

Journalist Jonah Tui Le Tufuga told Radio New Zealand the damage in and around Apia was worse than both cyclone Ofa in 1990, which killed seven people, and cyclone Val in 1991, which killed 16. “It is phenomenal. I have experienced both Ofa and Val and I believe they have nothing compared to what Evan has done within 24 hours,” he said.

“A lot of families are coming back to skeletons of their homes and most of their belongings being swept away when the river banks burst yesterday afternoon.”

Keep an eye out for the possibility of it spoiling the xmas weather for the upper NI…
still a long way out, but the fact there is already a developing easterly trough to the north means there is like a “window of opportunity”

Hi WW I will be interested in your updates on this. Not looking promising for us next weekend even though it will lose intesity by the time it gets here. We are flying to Wellington Xmas Eve so I sure hope it has passed over before then. Cheers Dave

The path it’s taking so far looks like it could easily turn down towards us next.. It’s one scary looking storm

Looking at the large scale of this Cyclone it may be a silly question but is Suva set to be hit head on? My sister, brother in law and two neices live there and Im worried sick about them. How often will you be doing updates?

Hi Kathleen, we’ll be stepping up our coverage tomorrow. with regular updates over the next few days. Suva was squarely in the firing line but now the storm may be further north.  The positive is that means the winds will be less intense in Suva, the negative is that it may mean more rain for them.  Either way, it’s looking nasty for Fiji but the centre of the storm may now just be a little further north.

Check out the threat maps from Fiji Met:

Thanks heaps Phil, I will keep an eye out on your homepage tomorrow 🙂 Merry Christmas guys!!