Cyclone Evan kills 2 in Samoa, Fiji to be hit next 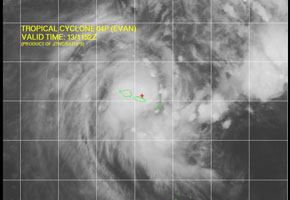 Updated 8:22am — Cyclone Evan, which has already reportedly claimed the lives of three people, continues to batter Samoa today and is expected to intensify with winds up to 145km/h.

At least three people, two of them children, were reported to have been killed in the cyclone overnight.

Samoa’s Meteorology Division this morning issued a special weather bulletin, predicting winds will pick up to between 120km/h and 145km/h within the next 6-12 hours.

The cyclone was moving northwest and at 4am (local time) was located 40km north-east of Samoa’s capital, Apia.

If it continued on the same track it would be positioned 25km east of Apia at 8am this morning.

It would then turn southwest and “intensify”.

Radio Samoa reported that one of the victims, a man, drowned in the Vaisigano, a river that runs alongside the famous Aggie Grey’s hotel in Apia.

The river burst its banks, and local media said Aggie Grey’s had been badly damaged.
It is the same river where a New Zealand teenager perished in March.

Taiana Pilitati, 18, from Wellington, drowned while desperately trying to save her 8-year-old sister Vaiola after they were hit by a large wave while swimming. Taiana was a cousin for former All Blacks Tana Umaga and Ne’emia Tialata.

It was not known last night how the other two storm victims died.

New Zealand High Commissioner to Samoa, Nick Hurley, said several New Zealanders were among visitors staying at Aggie Grey’s Resort who had moved to higher parts of the hotel because the river bursting its banks.

He said they were safe and comfortable, but without power.

“We’re not sure when the power will be back on, there are a lot of power lines down all around Apia,” he told Radio New Zealand.

Mr Hurley said people are hunkering down ahead of the storm’s return to Apia.

“We’re about to get the second wave of Cyclone Evan, certainly the first lot has caused immense damage all around, particularly around Apia. Haven’t had any reports yet about what has happened on the southern coast.”

Mr Hurley said the Samoan government has emergency supplies and residents were advised to stock up prior to the storm.

“The immediate need is probably covered by what individuals have been able to do, but after that we’ll be looking for discussion with the government this morning and later on just what the New Zealand Government to do to make the first offer of assistance.”

The Australian High Commission was among the other buildings badly damaged. The near-new building is in Beach Rd, and faces out to sea.

Herald journalist Vaimoana Tapaleao said it appeared that most of the storm damage was confined to the capital.

Late last night she phoned Toamua, a village of which she is a chief 15 minutes’ drive west of Apia, and everyone there was fine, although it was very windy.

One resident said the cyclone had caused a large school building to topple over in Apia, and the Faleolo International Airport departure lounge had also fallen over.

Earlier yesterday, flights were disrupted, affecting 136 passengers on an Air New Zealand flight that was to leave Auckland in the morning.

An airline spokeswoman said flights were expected to resume today. An extra charter flight was being prepared to take disrupted passengers. It is scheduled to leave Auckland at 9.30pm.

Air New Zealand is this morning reporting no scheduled cancellations.

Winds yesterday reached over 100km/h near the storm’s centre.

Samoan Red Cross teams were mobilised to help to evacuate residents in low-lying areas.
Other emergency workers were out in force throughout the day as residents struggled to cope with the winds and rain.

Cyclone Evan was upgraded to category 2 at 2pm yesterday. The cyclone is expected to move across northern parts of Tonga tomorrow and is forecast to intensify to a severe, category-3 strength by the time it reaches Fiji on Sunday.