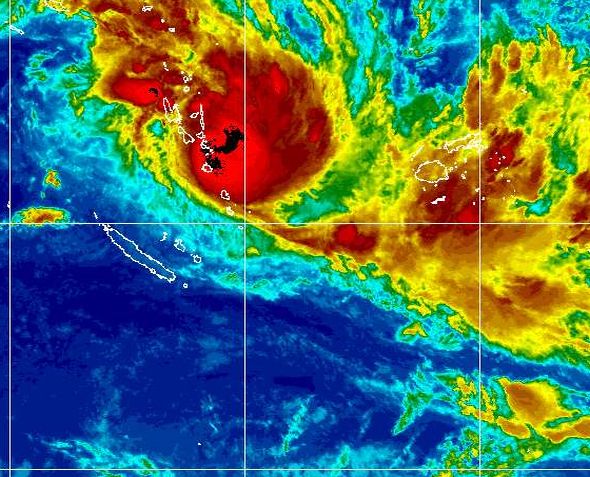 The air pressure has dropped to 940hPa and winds are sustained at 170km/h with that expected to rise to 185km/h by afternoon.

WeatherWatch.co.nz head weather analyst Philip Duncan says the storm will continue to intensify over the coming days.  “The sea temperatures are favourable, the atmopshere is favourable and Atu will cross the same body of water that saw Wilma go from a cat 2 storm to a cat 4 storm back on Auckland anniversary weekend.  It were these factors that lead us to believe several days ago that Atu would build into a dangerous cyclone”.

WeatherWatch.co.nz was the first weather organisation to predict the cyclone almost a week ago, based on data from the European ECMWF weather charts.  “We took that data, we looked at the sea surface temperatures and the surrounding air pressure systems and concluded that Atu was going to have all the ingredients to become a severe tropical cyclone.  We didn’t make that decision lightly to forecast the system so early in advance but we felt confident of the models and current data”.

Just 24 hours ago the Fiji Meteorological Service believed Atu would only reach category 2 status, however the storm has rapidly intensified.

High air pressure west of New Zealand is helping guide the cyclone out of harms way as far as New Zealand is concerned although big seas are still a possibility in the east, mainly between Northland and East Cape between Wednesday and Friday.

Meanwhile the Joint Typhoon Warning Centre (JTWC) has shifted their prediction of Atu’s future track slightly closer to New Zealand but severe weather still remains unlikely with the centre of the storm expected to be too far offshore.  WeatherWatch.co.nz says it’s possible Atu will track close enough to East Cape and Gisborne on Thursday to bring strong winds and large seas but doubts winds will be damaging.

It’s expected that Atu will be closest to New Zealand on Thursday but a direct hit still remains very unlikely with WeatherWatch.co.nz rating the chances at less than 20%.

Coincidentally the name Atu means “Born on Saturday” and Saturday was the day this tropical depression officially become a cyclone – however the name is part of a long list of names decided well before the cyclone season started, if not years before, and was simply ‘the next name on the list’.  Atu is a male name. 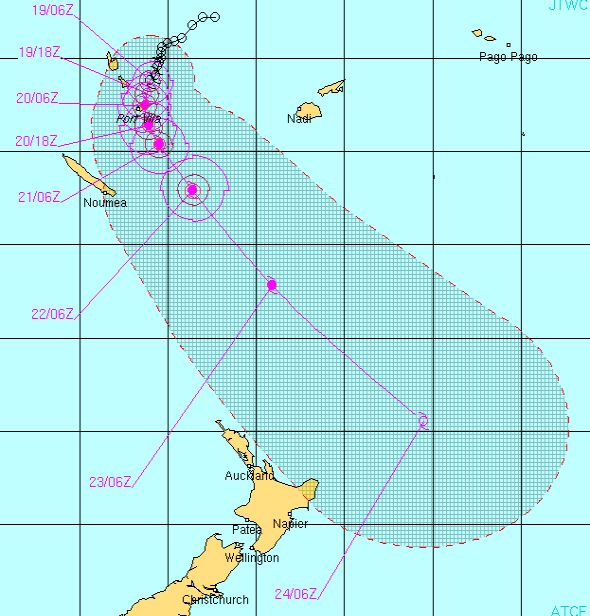 Atu’s track as predicted by the JTWC 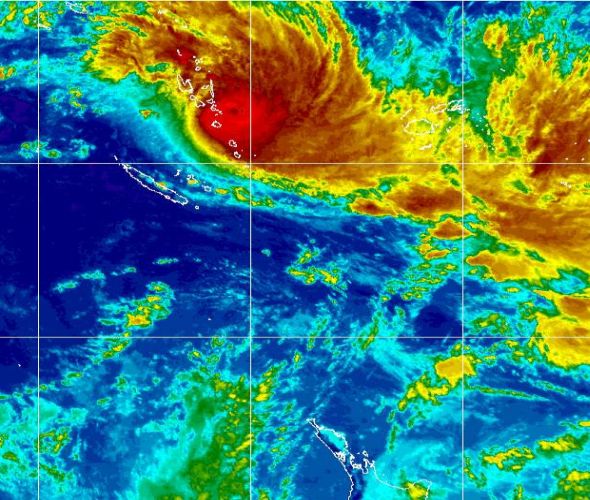 Thanks for a great site.
Please can you clarify the time zone used on your maps and perhaps print this on the map somewhere. Also with some of the captions on the maps it is not clear if they apply to the map above or the map below.
Thanks, Mark.

Considering a comment I saw earlier “Cyclones tend to follow the path of least resistance” ie tend to move into an existing low. With the low moving in from the far south is this likely to alter the path of Cyclone Atu?

Hi there, good question – if you imagine a low as like a small stream and Atu as like a river… and the highs are hills…Atu is likely to join up with those other systems but still will go around the high air pressure.  The higher airpressure will also damage the cyclone – weakening it and slowing it down.

We are due to go away for the weekend up to Whatuwhiwhi next weekend (26thFeb) .. what are the chances we will get rained out, and it be another storm of the century (as usually happens with us!!)

Although TC Atu is not expected to affect NZ much if at all, will he do what the others did last month and “open the door” to the tropics again?

HI there – thanks for the question, you raise a good point.  At this stage the tropics don’t seem to be as energised and with a large high moving in from the west (Currently south of Australia).  Our prediction is that conditions will remain quiet after Atu for at least 7 days, however the air pressure remains low overall north and north west of NZ so potential storm development remains as we head into March.