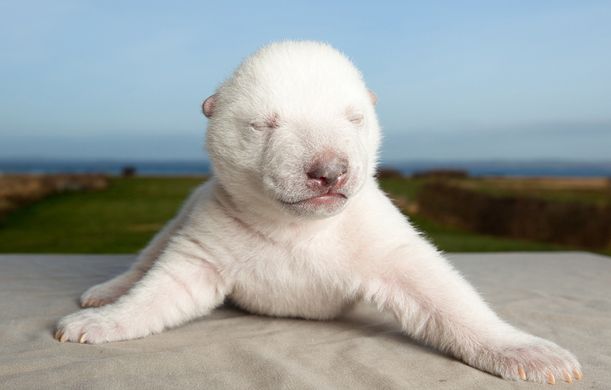 Warning – the video & photos in this story are incredibly cute! — When Siku the polar bear cub was introduced to the public late last year, he quickly became an Internet sensation, with his own Web and Facebook pages. But with fame often comes responsibility, and officials at Denmark’s Scandinavian Wildlife Park said Siku would have an important burden to shoulder.

“Siku is going to be an ambassador for polar bears, for global warming,” park director Frank Vigh-Larsen said in December.

Beginning Monday, the wildlife park, in cooperation with Polar Bears International and explore.org, a philanthropic media organization, will show a daily live look-in at Siku from 9 a.m. to 11 a.m. ET at explore.org/siku and polarbearcam.com. .

“We’re launching the Siku Cam on International Polar Bear Day, which is a day of action on climate change,” Robert Buchanan, president and CEO of Polar Bears International, said in a press release. “Our goal with the Siku Cam is for people to fall in love with this little cub and become inspired to reduce their carbon footprint to help save arctic sea ice.”

Siku is named after the environment of the polar bear, with siku being the most common word for sea ice in the Inuit language across the Arctic. The bears hunt on the sea ice, and as it disappears, so do opportunities for the bears to eat, the polar bear conservationists say.

“Our goal with the Siku Cam is to create awareness and inspire change,” Vigh-Larsen said in a press release. “And we are resolute that his image may only be used to advance those ends.”

Siku’s secret to saving ice may be melting hearts – Check out these pictures and try not to smile.