Current weather pattern may linger into 2012 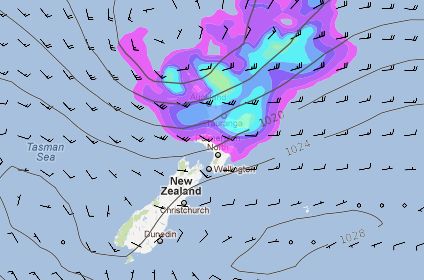 Hot, dry weather in the deep south, and cooler, cloudier and wetter weather in the far north may linger well into the first week of 2012 predicts WeatherWatch.co.nz.

The weather news authority says while warmer and more humid weather is likely for the North Island next week, the east to south east wind flow could return in early January while dry, hot, weather remains over the lower South Island.

The remnants of cyclone Fina are expected to bring a period of rain over the North Island, with some modelling suggesting parts of the North Island could be in for a few wet days around late December and early January.

New Years Eve in the top half of the North Island may be wet too – although it’s still too early to be specific about that one night.

Meanwhile a high in the Southern Ocean is likely to push into the lower South Island in early January – extending the hot dry spell and bringing the cooler easterly flow back into the North Island.

WeatherWatch.co.nz says the set up is a classic La Nina one which favours easterlies and more cloud in the north and dry, hot, conditions for Central Otago and parts of Southland.

But don’t despair if you live in the north – the dry days should still outweigh the wet ones over the next two weeks – with hotter summer weather still expected to develop in January and last until some time in March.

Some of that rain predicted for the North Island would certainly be welcome in Southland. To date this month only 11.8mm has been recorded on our weather station in Invercargill and the Max temperature is averaging nearly 21 degrees. Apart from 3 cloudy cooler days the weather has been well above average and things are starting to really dry out. I agree looking at the longer range the weather dosnt really look like changing any time in the near future.

Hi Paul – still early days yet and Wanganui may be ok around New Year.  Just follow our stories over the next week as we determine where exactly this low will track… a high will also be pushing into the South Island so if that pushes further north it could bring ok weather to half of the North Island.

Definitely need to wait a few more days before we have anything concrete.