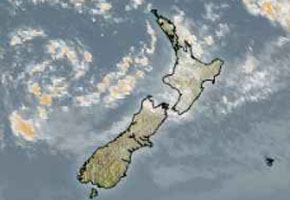 It is mostly cloudy over the North Island, there a few sunny spells in Northland however there is isolated showers there also with some being heavy particularly in the east. Showers some of which are heavy lie in a band from Auckland through to the Waikato, there are some dry spells also within this band. Then dry for central areas before heading over the ranges to Hawkes Bay and Gisborne where it becomes wet again, parts of Wairarapa are dry for now after rain this morning.

Auckland and Tauranga are currently on 15 degrees, New Plymouth 14.4. From Wellington through to Gisborne and about the Central North Island it is between 12 and 13 degrees.

Mostly cloudy along the east coast of the South Island with easterly winds, there are some sunny spells about the coast in Canterbury however areas of cloud are likely to float back over from time to time. Drizzle patches or light showers about the foothills in South and Mid Canterbury, some rain about the ranges in North Canterbury and heavy rain in Marlborough. Southland and Central Otago are sunny however the West Coast has it best once again, mostly sunny there and warm.

Currently 16 to 17 in Hokitika and Westport which is the warmest part of the country at present, temperatures averaging 12 degrees from Southland right up along the east coast through to Nelson. Some places a degree cooler, some a degree warmer. Kaikoura is one of the cooler spots in the country today sitting on 9 degrees.