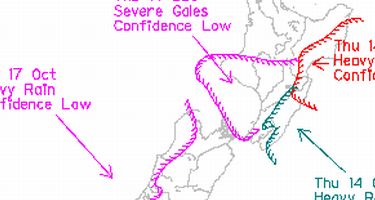 With a strong high weakening to the west and a large low to the north east the government forecaster has a number of regions included in their current Severe Weather Outlook.

Heavy rain forecast for Gisborne and Hawkes Bay should ease from the north during Thursday says the government forecaster.

“Confidence of warning amounts near the ranges and coastal hills of Wairarapa is lower. There could also be a spell of southeast gales over the central and southern North Island especially in the lee of the ranges and about higher parts of the central plateau but these should ease on Thursday also”.

The forecaster says a very strong northerly flow ahead of a deepening trough is likely to bring heavy rain in Fiordland late on Saturday and confidence of warning amounts is rising to moderate.

“There will probably be some heavy falls in the north and west of both islands on Sunday. Over southern New Zealand rain could turn to snow down to about 500 metres for a time on Sunday as the trough passes over and people are advised to keep up to date with weather forecasts”. 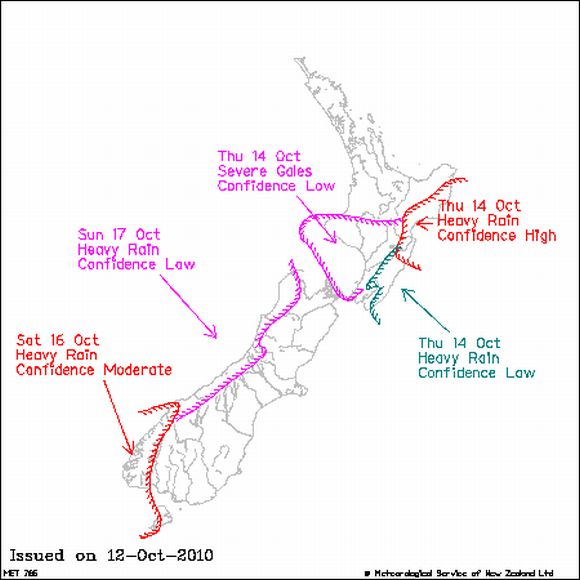 Well, we have not seen any of this in the Feilding, Palmerston North, Sanson area’s. Very little rain over nite. Its overcast with a slight gentle breeze – nothing to worry about so far.

How about some fine weather please.. and not just a few days