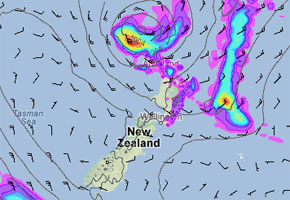 Some rain is clipping eastern Northland today and Gisborne while the centre of this system sits just to the northeast off the tip of Northland. Some scattered rain will later today also move into Auckland, Waikato and eastern Bay Of Plenty.

The heaviest rain and strongest winds this system will produce move in tomorrow into Northland as the centre of the low moves just past Cape Reinga, Cape Reinga will certainly not be the place to be tomorrow with strong to gale force southeasterlies and outbreaks of heavy rain.

Auckland will have gusty easterlies and a mostly dry but cloudy afternoon with a few spits of rain expected.  The risk for showers increases later in the day and just north of the city is where slightly heavier falls will be  – and then a greater chance of heavy rain as you move into Northland.

The low will move a little further westwards and then start to track southwards on Christmas Day, a very humid northeasterly airflow will cover the North Island bringing in plenty of cloud and the odd shower or drizzle patches about.

There may be a few sunny areas the further east one moves in a line of about Waikato through to the Manawatu however the flip side to any areas of sun is the odd heavy shower may develop late afternoon in these areas that get a touch of warmth.

Wednesday really sees the low weaken and start to move eastwards across the country so there should be a period of rain for most on Boxing day although the lower South Island may remain fairly dry.

Boxing Day may also be quite cloudy for many centres,