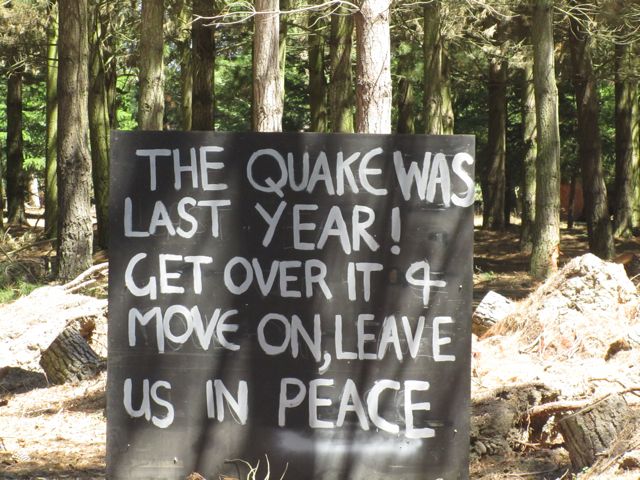 As the 6 month anniversary approaches since the September 4 earthquake in Canterbury, some people have had more than a guts-full of onlookers.

Telegraph Road was the scene of considerable damage as the quake moved the road several metres eastward and many curious Cantabrians and tourists have made the journey from the Garden city to see for themselves the force of mother nature.

Tourists buses, vans and cars have often stopped to take a look in awe but some local residents have had enough of all the attention for what is usually a very peaceful and remote part of the Canterbury Plains.

Since the quake, the road has been fixed and only a buckle in a very straight road is a sign that something unusual has occurred but it hasn’t stopped plenty of keen locals pulling over and taking snapshots, despite a very large sign stating what nearby residents want.

I can understand their frustration but in saying that the public have the right to witness this incredibly powerful force of nature. I’m sure a similar thing happened during the Edgecumbe earthquake. They should try and profit off it – sell mugs and t-shirts to all the tourists!!

I guess the locals can take heart that in anther 6 months or so many will have lost interest.