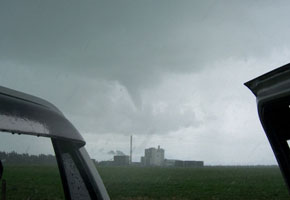 A twister or more then likely large whirlwind / dust devil has struck Cromwell at 3pm this afternoon, lifting roofs off houses in the Central Otago town.

The windy phenomenon originated in the town’s golf course before moving across Nepusultra Street to hit houses on Horace and Ortive Streets, before dissipating.

A house in Ortive Street and one in Horace St had roofing iron and tiles lifted off during the event.

There have been no reported deaths or injuries and the property damage was localised, according to police reports.

A local woman hid with her two young daughters in the bathroom until the twister passed.

Cromwell Police and the Fire Service have assisted residents at the two addresses to weather proof their properties and prevent further damage.

Weather analyst Aaron Wilkinson says a quick look at the situation makes him think this is not a true tornado as there were no cumulonimbus clouds in the area at the time.

“It may have been a strong whirlwind or dust devil if you like type of situation spinning up on a wind change in the area”.

Aaron has seen large whirwinds moving through upper reaches of the Waimakariri River before near the Bealey Hotel, and says it looks like they could cause some damage if they were to move over houses. So perhaps a similar situation has occured in Cromwell today.

Met Service are calling it a dust devil 🙂

It does sound like a more likely situation to have occured indeed.