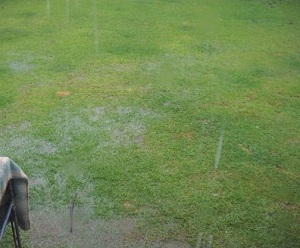 If the monsoon-like season is playing havoc with the holidaymakers, it is proving potentially crippling to cricket’s major associations as well.

A slew of abandonments and rain-affected matches has damaged the bottom line and means some associations will be relying on massive crowds for the remainder of the HRV Cup.

New Zealand Cricket has made little secret of the fact that, in domestic cricket terms, it has thrown all its eggs in the Twenty20 basket.

With the international players available for their associations until Zimbabwe arrive in late January, NZC has used the opportunity to shoehorn the most crowd-friendly format of the game into the holiday period.

While that approach has had its critics – including national coach John Wright – who believe test players need to play at least some first-class cricket during this period, it made commercial sense.

The miserable weather, however, has stymied prophecies of ringing tills.

Three of the 14 matches scheduled have been abandoned and two have been reduced-overs games.

More critically, four of the rain-ruined matches have come between Christmas and New Year’s Eve when Kiwis are looking for a sporting diversion.

“These are nervous times for the six CEOs,” said Northern Districts supremo David Cooper. “It can take the wind out of your sails pretty quickly if you get a few weather-affected games.

“We’ve only had one home match so far and we took a massive hit.”

ND hosted Canterbury on New Year’s Eve at the holiday paradise of Mt Maunganui, and the game was reduced to a five-over farce. “There was no one there,” Cooper said.

The major associations had considered commercial insurance cover for lost revenue. Instead, they pooled together, along with the national body, to create a central fund from their own budgets that would help those associations most affected.

At the moment Central Districts stand to gain the most after they suffered two abandonments at New Plymouth on December 29 and 30.

Auckland is another association badly affected.

Spokesman Iain Laxon said they would have expected a crowd of around 2500 for their opening match against Wellington, but instead barely 500 turned up in Stygian gloom to watch their 12-over slogathon against Muttiah Muralitharan’s Wellington.

“We got around 5000 for our next game against ND, so that made up for some of those losses,” Laxon said.

Cooper said it was too early to say what final effect the New Year’s Eve disaster would have on his overall budget, but it goes without saying, with three games scheduled for Mt Maunganui in the next four days, including today’s against Wellington, that the weather page has become required reading.

The major associations lead a hand-to-mouth existence at the best of times and, even budgeting conservatively for crowds of 2000, would stand to lose between $20,000 and $30,000 per rainout.

The HRV Cup final is the property of NZC and it is insured against abandonment, but given that it distributes income to the major associations, its balance sheet is also compromised by round-robin rainouts.

There wouldnt have hardly been 1 abandoned game so far if there had been cricket in the deepsouth!!! No rain down here!!!

Perfect venue at Logan Park Dunedin – slightest hint of a rain-off then the Dunedin Stadium a prime sitter – what a bunch of “wallys” you all are up north not to have foreseen this. The whole southern part of the South Island could have solved your problems. NZC take notice – also sort out your atrocious cricket test match schedule – why virtually nothing until March! Aussie at least seem to have some grey matter and are having some fabulous test match cricket right now!