Home > News > Cooler weather on the way early next wee...

Cooler weather on the way early next week with some rain 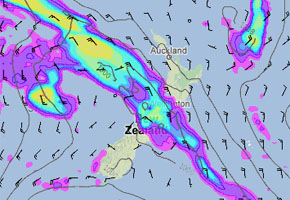 A font will begin to come together in the Tasman Sea later tomorrow and then on Sunday starts advancing over the South Island. Some heavy rain is expected again in Westland however should not be as bad as recent events.

On Monday the front weakens a little as it moves north then gets reinvigorated as it gets closer to the North Island in the west due to a disturbance coming off the east coast of Australia, this period of activity will move over the North Island during the night and early Tuesday morning.

While not heaps of rain anything would be welcome up in the North Island and this front looks likely to deliver 10 to 20mm in Wellington and then Taranaki northwards, other areas will likely receive showers at some point also however they may only be a few here and there.

The South Island’s east coast doesn’t miss out totally but it isn’t a 60mm spread over 2 or 3 days as some farmers about Canterbury would like, it will give some reprieve to the fire risk due to the dry conditions about.

Marlborough and North Canterbury should see some rain from Monday afternoon as those regions catch the front mentioned above spreading in from the west into a low pressure system just east of the South Island. Southerlies develop about Canterbury from morning and will see cloudy skies with drizzle patches in the afternoon also about South and Mid Canterbury. Drizzle patches continue at times on Tuesday then clear by Wednesday.