Cooler tomorrow in the South 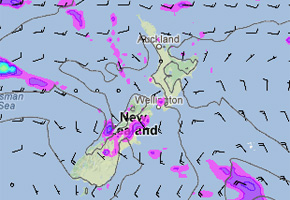 A front works it’s way north over the South Island tonight and onto the North Island tomorrow.

For the North Island the east coast will feel this most as cloud and the odd shower moves in during the afternoon after a sunny start, out west and for the likes of Auckland and Northland more or less a wind change to the southeast is the most notable thing that may happen.

Southeasterlies could be fairly brisk about Wellington through to southern Taranaki tomorrow afternoon then easing at night.

In the South Island most places will experience a cooler day and this will be felt most in Canterbury, high’s will likely only reach 16 or 17 degrees there. A big contrast to temperatures topping 32 in Christchurch today and other reports of even up to 35 about the region. Canterbury will see some drizzle tomorrow but rain is not very likely which the district needs, still it should give the region some relief.

Now a little earlier this week I mentioned Southland being the place to be from Friday this week, this still looks to be true. But there is an added bonus that looks possible in the far south coming up, or not depending how you look at the situation. A chance of afternoon thunderstorms later on Saturday as the air looks to destabilise due to warm surface conditions and converging winds.