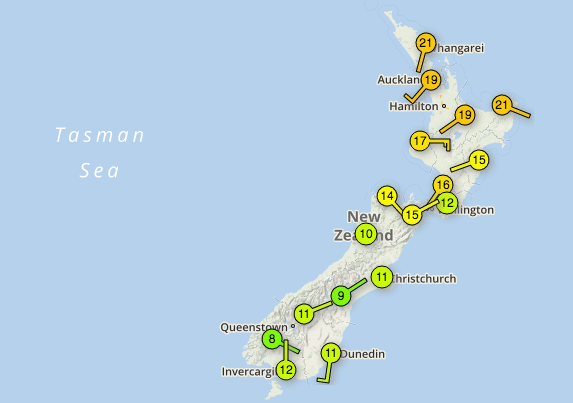 It’s fair to say that lately eastern, northern and inland NZ have been hot, with highs in the mid 30s day after day – but not today. In fact it’s cold in some places, like Central Otago and inland parts of Southland which have dropped as low as 3 or 4 degrees this morning.

Parts of Canterbury are down to 5 with 3 degrees through the mountains as of 9am.

The main centres are cool too – Dunedin currently has temperatures between 7 and 12 degrees while Christchurch is on around 11 or 12.

Wellington has a spread between 13 and 15 at the moment while Nelson is a little warmer with temperatures closer to the late teens.

Hawke’s Bay – which yesterday reached into the 30s by mid morning, is this morning just 15 to 18 degrees shortly before 9am. Gisborne is similar.

Auckland and Northland are in the low 20s and haven’t yet been affected by the main cooler change.

Auckland and Whangarei both reached 30 degrees yesterday but the highs today are in the low to mid 20s and on Thursday just around 21 or 22.