Cool temperatures to start the weekend 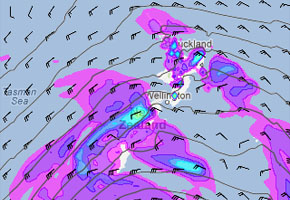 Tomorrow a southwesterly airflow will be more established over the country bringing cool temperatures to many regions, however we are in early October now so October’s cool is at least a bit warmer then September’s cool.

WeatherWatch.co.nz analyst Aaron Wilkinson notes that in the morning from Christchurch northwards along the east coast of the South Island it is likely to start out rather sunny and perhaps even warm getting to 16 or 17 degrees however a southwest change moving through around midday will quickly bring a drop in temperature.

The North Islands east coast is likely to have gusty westerlies with high’s in the mid to high teen’s, cooler temperatures there from evening as the winds tend more southwest.

Snow chances still exist with Mr Wilkinson saying falls to 400m in Southland, Fiordland and parts of Otago will develop overnight then clear tomorrow evening. Eastern central parts of Otago will be fairly sheltered so may not receive much precipitation in the form of showers or snow flurries then the likes of the Catlins and far western parts of Central Otago.

Southwesterlies are likely to be quite strong about Southland and the Catlins tomorrow also bringing in a wind chill factor so it will fell very cold there tomorrow which could put pressure on stock.

Wind picking up here in Mapua and a couple of decent claps of thunder from the south. Light spots of rain with more decent falls shortly I guess.