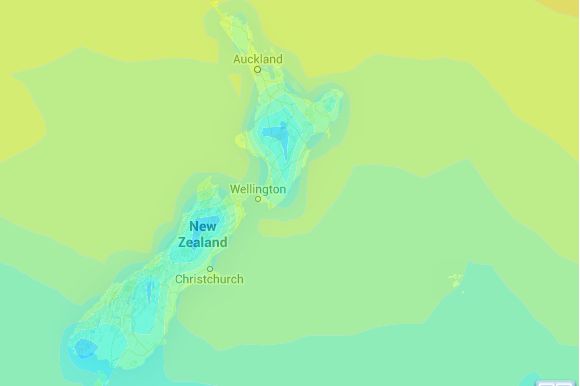 It might be smack bang at the end of January but on Tuesday morning a mid-summer frost greeted some residents along the Kapiti Coast in the lower North Island – and the cool mornings are set to continue says WeatherWatch.co.nz.

“Put simply NZ and Australia are sharing the same highs this summer – so they’re getting the hot northerly flow and we’re getting the cooler southerly flow” says head weather analyst Philip Duncan.  “These big highs have a big reach – by that I mean they can scoop up air from the tropics and dump that over Aussie, while at the same time scooping up colder air from the Southern Ocean and spreading that across New Zealand”.

Stormy lows in the Southern Ocean are helping fuel this wind flow further, with a lack of highs centred over New Zealand this summer to push back.

The southerly wind direction is making for cooler starts.  Single digital lows are affecting northern New Zealand too – sometimes at this time of the year overnight lows are hovering around the late teens and low 20s, not the low double digits and single digits with North Island frosts.

However the south and south west wind flows can make for fantastic daytime weather.  The shift from south west to southerly in Auckland has seen the clouds mostly burn up.  A slight change back to a sou’wester will see cloudy spells return.

The sou’west flow also gives many eastern areas and northern areas of both islands mostly sunny weather with hot afternoons – a bit like an early autumn pattern (which this is not…to be fair the spring pattern never really stopped!).

Some warmer overnight lows are in the forecast over the next week, but generally speaking expect more of the same temperatures across the country for the next week.

Thank you for that warning WeatherWatch, very much appreciate this. Out hosing frost off my tender plants this time of year was crackers.  Nice gusty SW at present here ahead of that stinkin SE.

You are quite correct here Phil, these SW winds are certainly cool, in fact the other night while walking the dog over the park behind our house I definitely started to feel very cold in the near gale SW. I was in just T shirt, shorts but people I passed where in winter coats.

Mornings are cool as you say with temps down at 10 deg or so at 7am ish. Am totally fed up with the strong SW winds of which are blowing now. Mind I would not enjoy the heat Australia is having so cannot have it both ways.