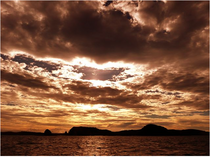 A cold change that brought snow and gales to parts of Australia is coming our way – but don’t worry, it’s already losing its some of its puff.

WeatherWatch.co.nz head weather analyst Philip Duncan says the south west change across the nation will be noticeable in both islands for different reasons, but won’t be extreme.

“For South Islanders the sunny, warm, weather of late will be replaced by colder, windier conditions especially in the deep south, but the sun is still in the mix too.  For North Islanders the relentless south east wind flow of last week has finally been replaced by light westerlies – bringing warmer and sunnier weather to the east – but more clouds to the west”.

A front is currently slowly moving up the South Island and will move across the North Island late Wednesday and push off the island early on Thursday.

Friday will see the sou’westers continue, blowing anticyclonic around a very large high coming in from Australia.  “This high is huge and should move in for the weekend and early next week”.

It may only last a few days before a short lived unsettled spell of a day or two for some parts, then another large high should arrive later next week.