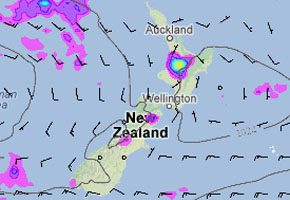 This coming Wednesday and Thursday brings the chance of a few heat showers developing during the afternoons in inland areas of both islands.

Thursday brings another chance for inland heat showers about inland parts of the North Island, in the South Island the risk moves into South Canterbury and North Otago about inland hills and ranges.

These showers may be heavy and they also bring the low risk of a thunderstorm with any showers that do develop. Tornadoes can be counted out though as the wind dynamics typically associated with these types of storms don’t support them. A weak funnel is always possible with any storm however but these generally are harmless.

These convective showers typically develop in summer due to warming of the land by the sun which creates a destabilisation in the atmosphere. Most of us in the three main centres around New Zealand are not likely to see any of these showers however.