Congressman says global warming not a problem… thanks to God 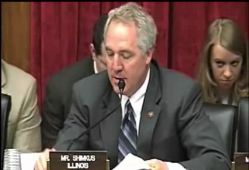 Forget recycling and limiting the use of fossil fuels – a US Republican congressman from the state of Illinois says that we don’t need to worry about climate change – God will protect us.

Republican John Shimkus is running to be the head of the Energy and Commerce Committee, which has a key role in climate policy.

He created a stir a couple weeks ago after he reiterated his belief that global warming is not a problem because God has promised he wouldn’t destroy the Earth again after Noah’s flood.

Charles Jaco, of the KTVI in St.Louis, just interviewed Shimkus on God’s promise and the hidden upsides of global warming.