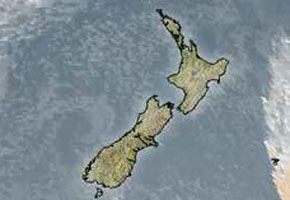 The title sums up the conditions for today in the North Island, in the South Island southwesterlies generally died away this morning although another front is lining up in the far south ready to move onshore later this afternoon or evening.

Temperatures are a little cool around the country due to those southwesterly winds, also the air in general is cold lower down in the atmosphere and not likely to support warm temperatures at the surface. The Bay Of Plenty however being a little sheltered from southwesterly conditions has the high at the moment of 18 degrees while Auckland relatively not far away is chilly on 13.6 degrees.

West to southwesterly winds are quite breezy in a few places, in Southland and also western areas of the North Island from Taranaki through to Kaitaia winds are averaging 30 to 40 km/h.

Showers are now mostly restricted to the east coast of the North Island as the remains of yesterday’s front clings on there, there was also one or two showers in western areas of the North Island this morning however they are easing and it is mostly dry now. For the past 24 hours Taranaki has received the most rainfall with between 10 to 16mm falling.