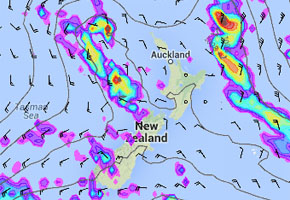 Today the country has a breather for most, with generally settled conditions, and the sun will likely pop out too. The odd shower will continue about the West Coast in the South Island and Southland.

However we are in Spring now, so this this settled break won’t last too long, there is likely to be a changeable pattern coming up in the near future -but thankfully it’s unlikely to be like the spring storm situation we have had over the last couple of days.

So the North Island, while it should start the day mainly sunny for the end of the working week, a new low pressure system brews in the Tasman Sea, and spreads cloud into western areas from afternoon, while the odd shower also develops about Taranaki. Rain pushes in for many in the evening, including about the lower North Island.

This low moves eastwards overnight, so eastern parts of the North Island can gradually expect some rain too -winds change to the southwest as the low moves away, and winds could be strong and gusty about western coastlines.

For the South Island not much will change through the course of the day, with showers in the west and south of the island. Elsewhere looks sunny with light winds tending westerly inland. Nelson and Marlborough especially may feel the effects of the low mentioned above later in the day, this could bring some rain which then clears overnight.