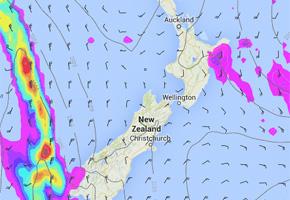 Conditions ease across the country today and tomorrow as a low pressure system moves away from the North Island and a ridge builds over the South Island. Wednesday sees a change in the air but most won’t see it just yet, for on Thursday and Friday conditions then deteriorate. For todayâ€™s weather check out this morningâ€™s national forecast here.

On Tuesday conditions are mostly sunny across the South Island with light winds, perhaps some cloud and drizzle about Fiordland. Over the North Island expect east to southeasterly winds for the lower half of the Island and south to southwesterly winds for the upper half, mostly cloudy in the east with the odd light shower Hawkes Bay northwards. Mostly sunny elsewhere with some high cloud about the upper North Island.

Mostly sunny across the North Island on Wednesday with light winds, gentle southwesterlies about Auckland and Northland. Northern Hawkes Bay and Gisborne continue to see the odd shower in a southerly airflow. Northeasterlies build along the South Islandâ€™s east coast, some high cloud about Otago gradually moves north during the day. Increasing cloud for the West Coast, drizzle about Fiordland turns to rain in the evening.

On Thursday a low moves into the Tasman west of New Zealand. Expect some rain for the West Coast of the South Island, cloud increases for the west of the North Island then areas of rain move in during the evening. Mostly sunny along the east coasts of both islands, some high cloud about and light winds then northwesterlies freshen later in the day.

Finally on Friday a strong cold southwesterly airflow spreads over the country, many in the west and south of
the country will likely see showers for much of the day with cold temperatures. A southwest change moving north along the east coast of the South Island could deliver a few heavy falls with thunderstorms and hail in the afternoon.