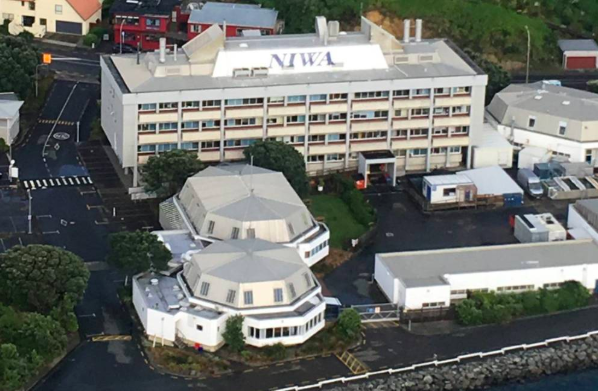 By Paul Gorman, Sunday Star Times — Imagine Fire and Emergency New Zealand setting up a national police force. Or KiwiRail building its own state highway network across the country.

It may seem far-fetched to have two taxpayer-funded government entities doing the same thing.

A Stuff investigation into how New Zealand has ended up with two state-owned forecasting companies has discovered official approval was never given to Niwa, which focuses more on climate, to develop a weather forecasting service.

Instead, Niwa made its own decision and, in a 2015 briefing for former National Party minister of science and innovation Steven Joyce, was quoted as saying it was “comfortable with the overlap with the MetService and regards the situation as manageable at the moment”.

The overlap is potentially costing taxpayers millions of dollars a year and there are fears it could confuse the public about who to listen to when extreme weather is on the way.

PAUL GORMAN/STUFF – MetService’s Kelburn headquarters, where forecasts have been provided since 1968.

“One state enterprise setting out to compete directly with another was probably without precedent and still is.”

Niwa’s move to establish its NiwaWeather unit in 2013 – which it describes as a “free generic weather website”, although it has meteorologists who forecast and comment on impending severe and notable weather, and who post on social media – has created an unparalleled double up.

A Niwa spokesman told Stuff it had actually “been involved in weather forecasting” since its establishment.

MetService and Niwa were created in the science reforms of 1992. MetService, which has about 250 staff, was charged with forecasting while Niwa, now with about 600 employees, was set up as an atmospheric and environmental research agency.

MetService has World Meteorological Organisation accreditation and holds the Government contract to provide New Zealanders with all public forecasts and severe weather warnings and watches.

ANDY JACKSON/STUFF – Choppy waters in the weather forecasting world as a result of Niwa’s decision to beef up its forecasting service (file photo).

According to Minister of Research, Science and Innovation Dr Megan Woods, there was no request made to Cabinet  relating to the establishment of Niwa’s forecasting unit.

“I am advised that the decision to provide forecasting services was made by Niwa. This was an operational decision and did not require ministerial approval.”

Asked whose idea it was to get involved in weather forecasting and where the paperwork was, Niwa’s senior legal counsel Annabelle Watson replied that “weather forecasting has always been part of Niwa’s activities” since it was established.

“Since that time, Niwa’s weather forecasting activities have evolved and developed considerably and will continue to do so as new knowledge and capability becomes available.”.

ALDEN WILLIAMS/STUFF – The Niwa-MetService forecasting overlap has some worried that the public will not know who to turn to for severe weather warnings (file photo).

Niwa was unable to answer where the paperwork was, as it had “no grounds for believing this information is held by or connected more closely with the functions of another applicable entity”, she said.

According to Dunne, Niwa’s justification for entering the forecasting business – the ministerial taskforce – was flimsy.

“The fact weather forecasting may have been referred to in the 1991 taskforce report does not automatically mean it should have become part of the Niwa mandate.

STACY SQUIRES/STUFF – Minister of Research, Science and Innovation Dr Megan Woods said there were no Cabinet papers about the setting up of Niwa’s forecasting unit.

“If Niwa did receive such a directive back then, it would be interesting what the rationale was, especially given the role of MetService, and what the government of the day saw as the advantage of having two publicly owned and funded weather forecasting services competing.

Philip Duncan, who runs WeatherWatch, a rival to the two publicly-funded forecasters, said Niwa was “muddying the waters”.

“It means the public get increasingly confusing ‘official’ weather statements about severe weather from our Government.

“Not everyone gets why this matters, but it’s a bit like how police and fire both have vehicles with flashing lights and both attend emergencies but have very different roles to perform.”

Niwa’s statement it had been forecasting for 27 years jars with other documents seen by Stuff.

A letter from Woods to environmental scientist Dr Murray Boardman in March said: “Niwa has provided weather services alongside MetService since 2005”.

Boardman told Stuff he wrote to Woods because Niwa’s forecasting service was clearly at odds with the research remit under which it was established.

“While this started under National’s watch, Labour have been reluctant to address it. One would think that Treasury should see the inefficiency of duplicate funding here.

“Niwa does think of itself as the pre-eminent CRI. The problem is that successive ministers in New Zealand have not had the fortitude to stand up to Niwa.

ROBYN EDIE/STUFF
Having two state-owned weather forecasters would be the same as KiwiRail setting up its own state highway network in competition with the NZ Transport Agency (file photo).

“It’s my interpretation that Woods thinks this is only an issue because of media quoting Niwa. She has the view – or at least her officials do – that Niwa knows its respective boundary.

“I am not convinced of that at all.”

A Niwa spokesman said it was the “pre-eminent CRI in climate and atmosphere, freshwater and ocean science”.

“As regard to boundaries, CRIs are expected to consult with shareholding ministers should any proposed activity fall outside the nature and scope of their activities as defined in their Statement of Core Purpose.”

Labour MP Clare Curran said she had broached this discrepancy when in Opposition and on Parliament’s commerce select committee.

“It is a genuine issue. If we have a government agency set up to do forecasting, that’s what they should do.”

Woods has said in the past Niwa’s forecasting is “one of a number of other weather forecasting services available in New Zealand” and a “by-product of its science and research”.

“However, MetService is the official forecaster for New Zealand and is recognised by the World Meteorological Organisation as … the weather authority for New Zealand’s civil emergency events.”â€‹

Our thanks to Paul Gorman and Stuff.co.nz for this incredible investigative story – WW.

You can CLICK HERE to go the Stuff story direcrtly – we encourage as many of you to please SHARE this story and spread the word.