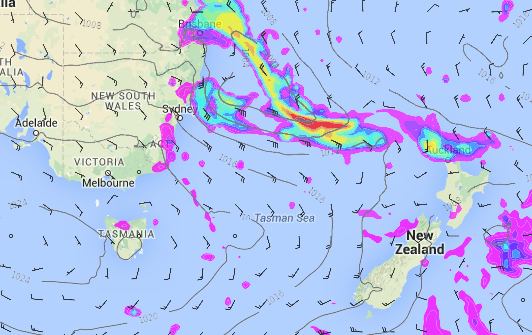 The weekend is looking like an east to southeasterly airflow will lie over much of the South Island, while high pressure sits out east, and a lower pressure system to the west.
That will result in cloudy skies in the east, with morning drizzle or showers gradually clearing from afternoon into evening.

The West Coast of the South Island looks mostly sunny with light winds and pleasant temperatures.

For the North Island, expect cloudy skies in the east with some drizzle more so from midday and showers from evening especially Hawkes Bay and Gisborne – east to southeast winds there also.

Thick high cloud for much of the rest of the North Island, dry with light winds.

About Northland expect easterly winds to build from morning, as a low to the north of the country moves closer during the day, the odd light shower or drizzle patch turns to rain during the afternoon / evening.
Auckland has cloudy skies, light winds with drizzle from evening then overnight rain.

On Sunday, east to southeast winds will prevail from East Cape through to the Waikato and northwards – and they could be be quite strong with gales in exposed coastal areas as the low mentioned above moves further south to lie over Northland later in the day.

Rain may also be heavy at times in some eastern areas from Northland in the morning then slipping into the Coromandel / Bay Of Plenty afternoon and evening.