Column: “The Lord giveth and the Lord taketh away” 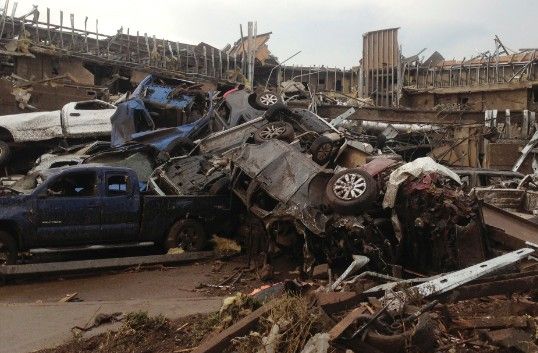 By head weather analyst Philip Duncan — On Tuesday someone tweeted a video from Oklahoma capturing the moment a family came out of their storm shelter to find their home – and every house and tree in their neighbourhood – was gone.

The man filming was in stunned silence until he quietly said out loud “The Lord giveth and the Lord taketh away”.  Oklahoma – like all its surrounding states – is in the bible belt.  Many people in this part of the US wanted Mitt Romney to win, they love their guns and love God even more.   It’s a little different to life in New Zealand.

In recent years I’ve been fortunate to visit parts of the mid-west and south.  From being in New Orleans to survey Katrina’s damage years on, to being in Denver where hail the size of baseballs fall during storms, to being in Nashville where tornadoes and spring storms frequently take lives and homes and cause significant flooding.

The one thing that hits me the most when I’m travelling there is that despite these clear and obvious conservative differences between where they live and where I’m from, most people in the mid-west are as warm and as kind as most Kiwis are. In fact, the accent is the only thing that really makes us different as people.  They are kind and incredibly loving people.  I’m yet to meet an American in America that has matched the more stereotypical views we see on TV far too often.

My heart breaks for those that lost children and loved ones in Moore – because the parents, kids and teachers  reminded me of schools my Dad taught at for many years.  Now this small school is headlining international news.

Here in New Zealand many of us couldn’t even comprehend a tornado larger than the town or suburb we live in heading directly towards us – this one was almost 4kms across at one point, twice the length of Queen Street in Auckland..

These communities in the south and mid-west are very strong – they will rebuild.  Family, Friends and of course Faith will give them the strength to do it.

*WeatherWatch.co.nz has very close ties with the US – via CNN America, CNN International and The Weather Channel (weather.com).

Great editorial Phil, I also share your opinion of the Americans in America, nothing like the TV types at all.
I travelled through Utah, Nevada and some of Colorado and everywhere we went the folk were pleasant and friendly. They loved to hear us speak, our NZ accent seemed to be a hit.

I can’t make out why they keep developing in Tornado Alley … surely the more they spread the more they’ll be struck. Still, very sad and tragic re Moore OK & my heart goes out to them. Good editorial as usual. Appreciated the comments about the people, as the thought of US Southerners always made me cringe with the staunch bible bashing, racism and conservatism. Sure thing too much TV. We have a guy who lives here and he’s from Montana, hell of a pleasant chap, one of us.

One might just as well ask, why do we live in one of the most earthquake-prone countries in the world? To put things in perspective, ‘Tornado Ally’ covers an area larger than New Zealand, or exponentially larger if you include just as tornado-prone areas further east.

More to the point would be why do people play the lottery? The chances of being hit by a tornado inside the center of ‘tornado alley’ is less than the chances of winning the lottery ten times.

The odds are that even if you live inside this area, you will never even see a tornado. Living in the southern coastal towns there is a certainty you will be hit by a hurricane. Do people run in fear there? Some may, but a rational human will see the risk is very low.”

My heart goes out to people of Moore and even more so the parents of the children who died during this tragedy. I can only hope that the American government will try and put storm shelters in every school that cannot afford them to protect their most precious gift – their children. Thank you to the teachers who tried to shelter them from the monster – your bravery will not be forgotten. To the people of Moore and Oklahoma – we are keeping you in our thoughts and prayers.