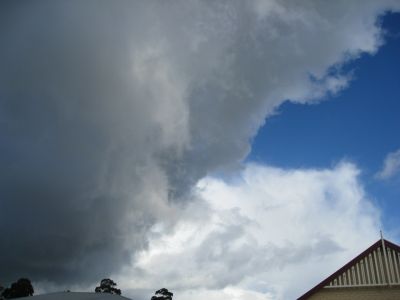 Just what is “unsettled” weather? Many people assume it means stormy or wet – but unsettled often just means “changeable”.

We have a very large low moving in this Friday – and it will linger over New Zealand, mostly the North Island, until the end of next week. That sounds dramatic but let’s break it down.

Yes the low is “large” – it will cover most of the Tasman Sea this weekend from the Aussie coast to the NZ coast. But large doesn’t always mean aggressive. In this case large means lazy and slow – this system will take several days to cross the country and because it’s so large the energy is being spread out over a much greater distance.

The greater the distance the more ‘gaps’ there are in the weather. So we have bands of rain, areas of showers, areas of cloud and some sunny spells in there too. Just take a look at the latest satellite map of the Tasman Sea and you can already see how messy it looks.

Over the weekend there will be a mix of rain or showers. Saying “rain or showers” isn’t a cop out when most forecasters use it. A shower is defined as precipitation that lasts a short time – less than 30 minutes – and generally doesn’t cover a huge area. This weekend we will have showers moving in but they will be tracking slowly – that means in some areas they could last longer than 30minutes which makes it go from “showers” to “rain”. You can see why this can be a tricky area to nail down but WeatherWatch.co.nz is making a name for itself by trying to break this down as best as possible each time we have a rain event.

With the low being so large, but not packed with a lot of energy, it means there will be huge gaps in between the areas of rain/showers. So long dry spells too, especially in the south and east.

Weatherwatch, you guys make weather predicitions that much better – thank you for the time and effort you guys put in to explaining the various different aspects of the weather, as well as the terminology typically used in weather forecasting. It’s so refreshing not to just have “A large low is moving in” but having a thorough explanation of what is actually involved in that enormous weather system.

So thanks again everyone at Weatherwatch!!

Thanks for your feedback and we hope it makes sense at the end of the day.

A shower is from cumulus or cumulonimbus clouds. Rain is from stratoform clouds. The length of the fall of rain doesn’t matter. So falls under 30 minutes are generally called Scattered or Brief rain. It’s entirely possible to get showers that last all day without a break if the cumulus clouds are bunched together.
Just to make it confusing, showers are often embedded in nimbostratus so that you can’t really tell the difference at ground level.

Australia’s Bureau of Meteorology uses the 30 minute rule, as do we.  But you’re right, it can be a messy/confusing area which is why WeatherWatch.co.nz ignores the "rules" MetService use and instead use terminlogy that better reflects what modern day Kiwis would say instead of last century definitions.  So we would rather call a cloudy day with brief moments of preciptiation "Cloudy with showers" rather than "Scattered rain".    The word "rain" conjures up an image of a wet day – showers you can work around 🙂

Great explanation WW, thank you, your description does better meet the understanding of today’s Kiwi’s over the rather very technical Met Service ones. That is why as you say, we visit your site for the forecast we can understand.