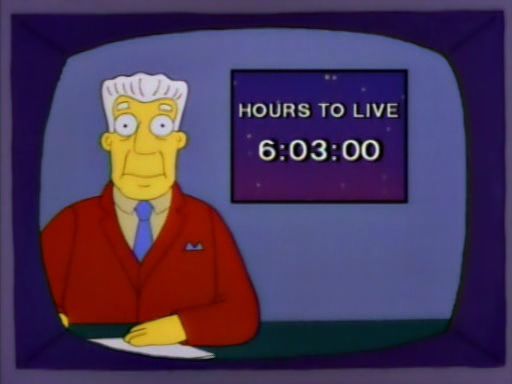 I have always been a huge fan of The Simpsons – so many of their community hall scenes remind me of New Zealand in real life.  Never underestimate the power of a good old fashioned mob.  One particularly funny episode from the 90s was about an asteroid heading directly towards Springfield.  When the meteorite landed it was big enough to fit in the palm of your hand – the huge rock broken up by the thick layers of pollution as it entered the earths atmosphere.

The Springfield public, sitting around realising they weren’t going to go the way of the dinosaurs, suddenly announced “Let’s go burn down the observatory so this never happens again!”.

Sometimes being a weather forecaster I feel like I’m in that episode.  The idea of destroying the observatory is brilliant – it’s like saying ‘that cyclone nearly wiped out NZ, let’s destroy all the forecasters so this never happens again’.

Back in March there wasn’t an hour that went by without someone tweeting, facebooking or emailing us directly to ask for rain. They told me it could rain for a month and they wouldn’t care.  My response back then, even to farmers, was be careful what you wish for.

Now we’re in the last month of Autumn and the rain has been heavy in a number of areas – and now I’m getting the “I wish it was still summer” emails.

On Saturday I had to head up to Helensville, about half an hour north west of Auckland.  On the drive up there – on what was a clear blue sky day and a few degrees warmer than average, I noticed that several farms were completely underwater.  Heavy rain that had fallen last week – then again last Friday night – saw the river burst its banks and flood low lying dairy land.

Of course this region was the first to be declared a drought zone this year – now some of those drought affected farms are sitting under a metre of flood water.

As we head into winter the weather pattern that created our droughts is still with us – even if the highs have backed off a bit.  For now we are in a healthy pattern of rain makers followed by highs….for now.  While that’s normal for May there is one aspect that isn’t normal – the slowness of the weather.  We’re still operating on a 10 to 14 day pattern (in other words, roughly even second week we see a big low moving in) – normally by late Autumn we’re in a weekly pattern.

So for now Autumn’s weather is running on a slower summer clock.  Winter may not be as extreme as our summer and early Autumn months were – but the risk for these slow rain makers to cause more localised flooding is there.

So be careful what you wish for as we head into winter after a dramatically dry summer.  We may dream of a winter with rain and snow – but too much of it will be a nightmare.

Speaking of dreaming – let me leave you with a great quote from Homer Simpson – “All my life I’ve had one dream, to achieve my many goals”.

Making the most of a glorious autumn day, a great spirit-lifter with its vibrant colours. Blue skies, very little wind.

Philip, I had just wanted a balanced summer – rain every couple of days which would have benefited my little vegetable patch.

I’m in Remuera and a heavy mist has flowed in very quick from the South now to the point where I can see anything from 100m away. It seems like quite a dark mist though.

Hopefully it will burn off a little later and you’re right about a balanced summer.It would be great every season.

Thanks for your comments 🙂

People have a 2 second memory! Over the 2011/12 summer most people were complaining about the summer, but I reminded them that we were gavinv very warm temperatures right up tho June! If winter had a late start, then how can you expect summer to kick off early. But the summer net got into gear… I actually liked though, it was a pleasant summer, not too hot and plenty of rain.

In this region the 2011/12 summer was the 3rd in a row that was inferior to normal, and was particularly cloudy. The 2012/13 one was a well overdue experience.

I would have been happy to see the rain-short sun-high spell last longer. Yesterday in W’gton started clear but from late morning was a cloudy “spoiler” – little or no sun, enough stratus to drain the colour and life out of everything. I find this to be the most annoying feature of the climate here, as it “wastes” an anticyclone. I would gladly swap yesterday for a windier and sunnier day.

That was a layer of lowish stratocumulus, not stratus. 😉

That’s a small distinction. Outcome was the same though! Either way sufficient to spoil the day.