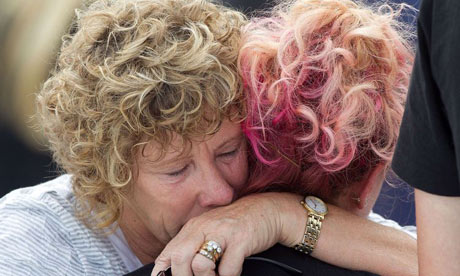 And, of all the cities in the world – Christchurch is in the hot seat for solving the medical mystery that has left doctors stumped for centuries.

The September 2010 quake broke nine and the deadly February 2011 quake about 30, allowing our health sector to research the bizarre syndrome like never before.

And for the first time in the world, Christchurch researchers are following promising lines of inquiry that may reveal a genetic link between some victims.

Broken heart syndrome’s modern medical title is stress cardiomyopathy, but the notion has been around since the 16th century.

It featured in William Shakespeare’s epic tale Romeo and Juliet, claiming the life of Lady Montague, but modern medicine only recognised the syndrome in the past few decades.

“There is nowhere else in medicine where you can be so sure that there is someone sitting in front of you who could die from an emotional trigger. It does freak me out a bit.

“People think you are the specialist and you should know everything, but there is lots we just don’t know about this yet.”

What Bridgman does know is that stress cardiomyopathy causes part of the heart’s main pumping chamber to freeze up.

It can be brought on by all sorts of unexpected emotional events such as the death of a spouse, a car crash, the loss of a job or a particularly bad relationship break-up, and it nearly always affects post-menopausal women.

Victims can die of two things – either too much of the heart has stopped pumping or the heart rhythm is thrown out of kilter.

The condition usually comes on in the afternoon, unlike heart attacks which typically happen first thing in the morning. Bridgman advised: “If you are going to dump your girlfriend, don’t do it in the afternoon.”

Before the earthquakes, Christchurch Hospital would typically see one broken heart case every few months.

After the earthquakes a group of cardiologists, geneticists and psychiatrists from the CDHB and the University of Otago joined forces in August 2011 to study the rare condition.

Virtually all of the quake victims agreed to be involved and some sporadic sufferers also volunteered, pushing the number of research patients to about 50.

Almost 95 per cent were women aged in their 60s and 70s who were fit, healthy, “psychologically fine” and had since made a full recovery, Bridgman said.

They came from suburbs right across the city and did not have pre-existing health conditions usually associated with heart attacks.

“There were no patterns at all, they were just normal women.”

For someone to be struck down with broken heart syndrome, it had to be “the perfect storm”, Bridgman said. “They usually have to be women, menopausal and have a sudden emotional stress, generally in the afternoon.”

And the research group may have recently discovered another link within the patients.

University of Otago psychiatrist and lead investigator Dr Cameron Lacey said the team was following “some promising lines of inquiry” into the genetic make-up of the sufferers, but would not be drawn on details.

“We have followed several leads in the past which have not held up on further investigation but we are working very hard on this at the moment and we would hope to be able to say something more definitive within a couple of months,” he said.

The 79-year-old widow would be one of only a handful of people in the world to suffer from broken heart syndrome twice.

She was left struggling to breathe and clutching her chest after both the September 2010 and February 2011 earthquakes.

Both times she was rushed to hospital and told she was suffering from the broken heart condition, known as stress cardiomyopathy.

When she heard her diagnosis for the first time, Madden thought: “Well for heaven’s sake I have never heard of that before.

“I just didn’t think there was anything like that. I had read about broken hearts in some old Jane Austen books but I had never heard of it actually happening.”

After both quakes she was kept in hospital for about four days and released with medication.

“It is pretty hard to get your head around being told your heart is broken. You do wake up in the morning feeling your pulse and listening to your heart in the days afterwards,” she said.

Madden, who has angina, suffered a heart attack about 15 years ago and said broken heart syndrome was equally as painful but slightly different.

“It didn’t feel like a heart attack, it just felt like somebody was cramping me around the chest.”

The mother of three lost her husband to illness 10 years ago and described herself as “pragmatic and independent”.

“I do know it is possible to die of a broken heart now but I don’t dwell on anything like that. I would just scare myself to death after all. I tend to be more matter-of-fact about things.”

She now takes up to eight pills a day and wears a medic alert bracelet for emergencies.

Madden has not suffered any chest pains since February 2011.