Column: An Aucklanders’ guide to cold stuff falling from sky 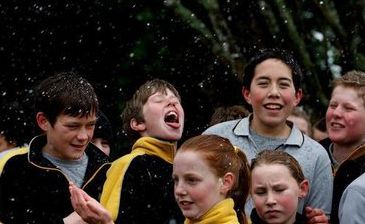 This year, Christchurch residents have become used to having a new word in their language – liquefaction. A week ago, it was Auckland’s turn to have a new word added to their vocabulary – graupel.

My dusty Collins English Dictionary doesn’t have the word but it is widely used in meteorological circles – and in other countries, such as the US and Canada, where it’s common in winter.

The small white, soft, pellets look like a cross between hail and snow … and that’s basically what they are. Lots of people witnessed snowflakes falling in Auckland on Monday as our historic snowstorm roared across the country – but more people would’ve seen graupel as it was far more widespread.

So graupel, sleet, hail, snow, freezing rain – what are all these things? Here’s a quick guide:

Graupel – starts with a snowflake then as it falls to the ground super-chilled droplets of water start to freeze to it. The end result is a snowflake wrapped into a ball with ice on it – looks like hail but is light and soft.

Snow – this is water vapour that has started to freeze and stick together. Over time, as more frozen water particles stick together, it turns into a beautiful snowflake – each flake is unique and, when you look closely, they have that snowflake design.

Sleet – this is snow that partially melts as it falls to the ground. It’s a raindrop that’s a bit slushy with melting soft ice.

Hail – this is rain drops that are frozen. Hail can be as small as a ball bearing and – in summer with those huge thunderstorms – as big as a grapefruit (thankfully not that big here in NZ). Those balls can be deadly to humans and livestock if you get smacked on the noggin by one.

Freezing rain – I saw this term used quite a bit this week. Freezing rain isn’t actually ice when it falls from the sky. It’s simply rain that freezes when it hits a super-chilled surface. This happens when the ground is extremely cold but the air above is warmer. When I was in Canada a few years ago, a warm front moved in after a cold night. It was raining on the windshield of the car but turned to icicles on the metal body of the car – and roads were like skating rinks – you couldn’t even stand up in some places the ice was so thick and slippery – yet it was raining.