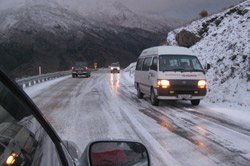 2013 has begun with a bang with flooding, seriously high winds, snow but also high temperatures, sunshine and sea breezes.

The first couple of days of the new year have been all over the show but after today it could settle down…well for two or three days at the most.

Severe thunderstorm warnings were issued by MetService for Taranaki in the wee hours of this morning which is the same system that delivered al the heavy rain in the south.Westport also had a similar warning last night.

Cantabrians saw a thunder and lightning display late yesterday and also last night over parts of the province with areas of heavy showers.

Snow has also fallen to low levels across the south last night and very early this morning.Weather analyst Richard Green says the Crown Range and Lindis Pass saw a coating. “It didn’t stop there either as the top of the foothills in Canterbury also saw a dusting” he said.

Today there’s a chance of isolated heavy showers or thunderstorms over the east of the Mainland once more.
“There’s potential for more activity later today as a disturbance is not set yet to move away entirely” according to Mr Green.

Aucklanders have seen a contrast with the weather after recent summery conditions and warm days and evenings.Showers have moved across the city and the temperature has dropped a few degrees as well. A clearance is likely later today with tomorrow and the weekend looking mostly settled.

So today it’s looking generally cooler in most places and a bit of everything is expected yet again…ahhhh a Kiwi summer.

Home image of a snowy Crown Range courtesy of scene