Colorado floods: Over 500 unaccounted for as ‘devastating’ rain looms 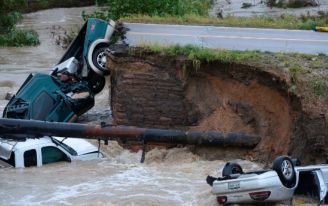 Clear skies allowed for more evacuations and rescues in flood-devastated Colorado on today, but the forecast through tomorrow called for more heavy rain.

Even after the last of the storms, authorities can’t say how long it will take to reach residents who will remain isolated by devastated roads.

One other death had been reported in Boulder County and one occurred in El Paso County.

More heavy rain is forecast through Sunday for the region, on top of the 15 inches some parts of the state have already received.

On Friday, National Guard troops using “high-profile” trucks to wade through water were evacuating the entire Boulder County town of Lyons, which had been cut off since the flooding began Wednesday night.

“It just really felt like God came down and saved us. It felt great,” Melinda Villa said of the National Guard’s arrival at the Lyons apartment where she was stranded with her 1-month-old infant. She said, “I just felt like I was trapped. No phone, no water, barely any formula for my baby, barely any food for us.”

Jonathan Linenberger described a Noah’s Ark-style evacuation as he, his fiancee and four dogs and three cats greeted the National Guard truck.

“We had to go (through) knee-deep water, at least. We had to wade our animals across into the truck to get them there,” said Linenberger. “That was the first thing you can grab, your loved ones — and that’s what we have.”

The National Guard also was evacuating the entire population — 285 people — from the town of Jamestown by helicopter, CNN affiliate KCNC-TV reported.

Four helicopters were being used for rescues in Boulder County Friday, Pelle said. The sheriff said helicopters also may have to be used indefinitely to deliver food and water to residents along damaged rural roads.

“Please know we’re working hard,” Pelle told residents who might see his televised news conference. “We’re concerned about you. But you’re going to have to be patient. Please know this is an unprecented event.”

About 80 people in Boulder County have been reported missing or “unaccounted for” by relatives, Sheriff’s Cmdr. Heidi Prentup said.

In Larimer County to the north, Sheriff Justin Smith surveyed the heavily damaged Big Thompson Canyon by air Friday. Some people remain stranded in homes there, he said, adding, “How we’re going to get them out — it’s going to take a damn long time.”

However, he said the break in the rain Friday allowed school buses to begin evacuating students who had been stranded at a school.

Smith described widespread damage to roads. He estimated 17 miles of Highway 34, a major artery, will need to be rebuilt.