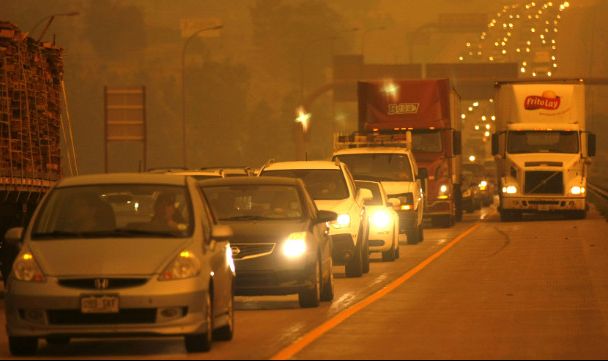 Firefighters on Wednesday were again out in force battling the blaze, but the weather, again, was an enemy.

The Waldo Canyon Fire had engulfed 15,517 acres, with only 5% contained, and had forced 32,000 people to flee their homes, said Rich Harvey, the incident commander.

“You saw yesterday as bad a fire behavior as you are going to see anywhere, anytime,” he said, referring to extremely dry, hot and windy conditions. “We expect further trouble from the weather today.”

The 1,000 firefighters at Waldo Canyon braced for predicted thunderstorms Wednesday afternoon, which could worsen the situation. The storms bring with them strong winds that can gust unpredictably in any direction.

“That will make work for firefighters more difficult,” Harvey said.

Several wildfires are raging in Colorado. The Waldo Canyon Fire captured attention because of its proximity to landmarks such as Pikes Peak and the Air Force Academy, and also to Colorado Springs, a city of about 400,000 which is the state’s second largest.

Winds gusting over 110km/h through mountain canyons blew the wildfire through containment lines into northwest Colorado Springs on Tuesday afternoon. It roared downhill, burning to the ground the Flying W Ranch, a popular Western-style tourist destination.

CNN meteorologist Dave Hennen likened conditions to a double-edged sword. While temperatures were down a bit Wednesday, high-based thunderstorms will be fed by rising air, wind and low humidity, he said.

Such storms produce lightning and rain, but dry air will suck up most of the precipitation before it hits the ground. Lightning can reach the parched soil and possibly ignite additional fires, according to Hennen.

Richard Brown, the Colorado Springs fire chief, described it as a “firestorm of epic proportions.”

“There were people’s homes burned to the ground. It was surreal,” he said late Tuesday night. “There’s no question, it’s serious. It’s as serious as it gets.”

He said officials still have not determined how the fire started.

Hickenlooper said the city and county were using all the resources available to them to tame the fire.

“Let’s not let the fire beat us,” he said. “Fires always start small and you want to get them as soon as you can.”

The flames came dangerously close to the U.S. Air Force Academy campus and an evacuation order was issued for about 700 residents in its Pine Valley Housing and 1,400 in Douglass Valley Housing, said public affairs officer John Van Winkle.

The facility was closed to visitors Wednesday, with only essential personnel asked to report.

The academy’s powered flight, glider and parachuting operations have been called off since Saturday so that the U.S. Forest Service could use runways for helicopters used to fight fires along Colorado’s Front Range, Van Winkle said.

The academy’s Class of 2016 — all 1,045 cadets — is still scheduled to arrive Thursday, but officials are making contingency plans if they have to report to a different location on the base.

Many Colorado Springs residents waited anxiously to get word of whether their homes had been spared.

Becky Schormann was one.

Her family managed to take some sentimental items with them when they left, but still had to leave behind a boat, a pair of ATVs, a China cabinet and an antique doll collection.

“I keep telling myself: It’s going to be OK,” she said.

Schormann told CNN that flames came to within 20 feet of their home but were beaten back.

“Our volunteer fire department is just awesome,” she said.

The Schormanns are staying in an RV at their daughter’s home. The family’s two dogs, a pony and a donkey also came along for the ride.

“The fire conditions could not be worse,” said Anne Rys-Sikora, spokeswoman for a multiagency fire response team. “It is like a convection oven out there.”

Colorado Springs set a record high temperature of 101 on Tuesday as firefighters contended with brutal conditions, including ash falling on highways and neighborhoods. Officials rushed in crews and aerial equipment in a bid to slow the fire.

At least six other wildfires were active in the state, according to the Colorado Division of Emergency Management.

The largest of the fires was the High Park Fire, which began June 9 and has now consumed 87,284 acres, the U.S. Forest Service said. It was 65% contained Wednesday. The total number of homes stood at 257. An estimated $33.1 million has been spent trying to contain the blaze.

The Federal Emergency Management Agency authorized the use of federal funds to help fight the Waldo Canyon Fire after Colorado Springs and surrounding El Paso County declared an emergency, which allows them to receive state and federal aid.

A portion of neighboring Utah was under a red-flag warning, with at least three wildfires burning Wednesday.

Authorities said they found the body of one person after they entered the evacuated areas of the Wood Hollow Fire, about 30 miles south of Provo. The victim had not been identified, according to the Sanpete County Sheriff’s Office

FEMA is providing funds to help fight the Wood Hollow Fire, which has grown to 46,190 acres since starting Saturday afternoon. Containment was 15%.

– CNN.com – Click here to view photos of the fire