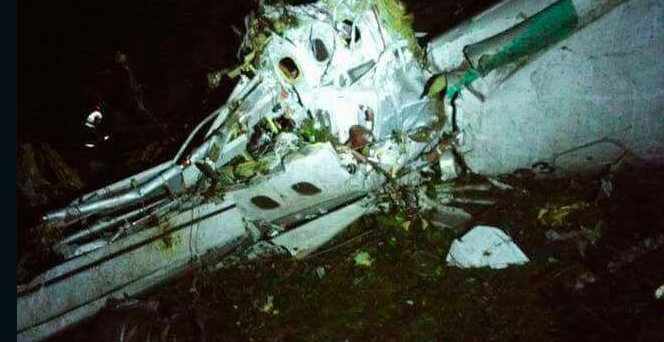 AVIATION — Updated 11:15pm — CNN — A plane carrying 72 passengers — including members of a Brazilian soccer team — and nine crew members crashed near Rionegro, Colombia, according to the country’s civil aviation department.

The accident happened in an area called Cerro El Gordo near Medellin, the department said.

An airplane with 81 people on board, including players from a Brazilian football team, has crashed in Colombia, the country’s aviation authorities said.
The plane declared an emergency between the municipalities of La Ceja and La Union, according to a statement from Colombian aviation officials.
The civil aviation agency announced that six passengers — three players, two crew members, and one journalist — survived the crash.

The plane took off from Bolivia’s Viru Viru airport at 6:18 p.m. local time, according to air controller Manuel Palamas.
Officials didn’t specify what happened to the plane but did say that the wounded were being transported to assistance centers.
But images of the incident show what appear to be damaged parts of the plane.
The aviation department’s statement said that passengers belonged to a Brazilian soccer team called Chapecoense.
Tattered debris emblazoned with the club’s logo was also photographed at the crash site.

A logo of Brazilian football team Chapecoense is found at the site of the plane crash.
The mayor of nearby Medellin said on Twitter that he is on his way to the accident site.
“The important thing here seeing that there might be survivors, it’s saving lives. That’s first and foremost,” Mayor Federico Gutierrez said. “We’re here supporting them on this very very sad story. They have our solidarity, so do their families, their friends, their countries. “

Satellite images show that scattered showers and thunderstorms have been present in the region over the last 12 hours — though no big weather makers, according to CNN meteorologist Michael Guy.
There likely would have been turbulence in the region due to intermittent thunderstorms and winds from around the mountains in the region, Guy says.
A statement from nearby Jose Maria Cordova airport says the accident site can only be accessed by land because of weather conditions.
The Colombian Air Force had to abort a mission to the accident site due to inclement weather, according to Colombian officials.