Colder nights ahead, frosts as far north as the Bombays 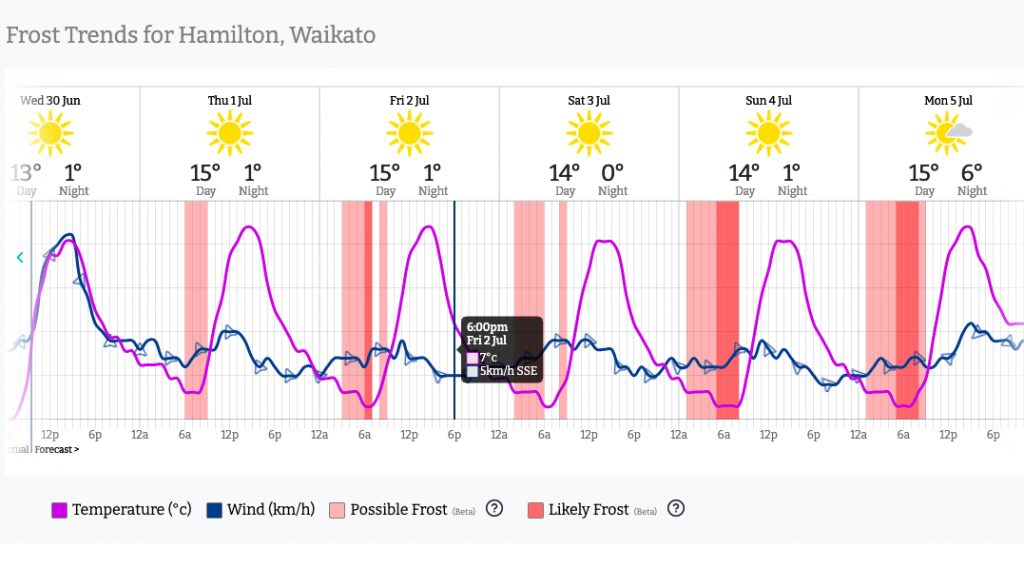 The polar snap has gone but the cold air left behind will be locked in by high pressure drifting in from Australia.

Following the wind chill of recent days the high pressure zone will bring milder daytime weather to most regions – but the nights will be colder with lack of wind and cloud, allowing temperatures to sink further and any daytime heat to evaporate quickly overnight.

Frosty weather is forecast as far north as the Bombay Hills – and in some pockets frosts may again occur in some inland spots of Auckland region too. Waikato looks especially cold, likely the coldest region for overnight lows in the coming days for the North Island.

While this weather is 10/10 for normal winter weather in New Zealand, it’s a bit of a change from the milder than usual weather many regions – especially the North Island – have been having lately. In fact, just a few days ago on Sunday it was over 20 degrees in Hawke’s Bay and around the late teens and 20 degree mark in Auckland by day with overnight lows in the mid teens. This week the daytime highs are around 13 or 14C in both those regions.

The frosts aren’t particularly severe either with some South Island regions getting a slightly milder airflow to limit how cold it will be and places like coastal Christchurch and Dunedin borderline for frosts.

Don’t forget to check the NZ Frost Forecaster over at www.RuralWeather.co.nz if you need more details or to see if your region – or other parts of NZ – are in frost territory in the nights ahead!