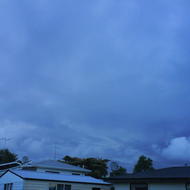 The weather across many parts of New Zealand today is cold and wintry as a low in the Tasman Sea continues to deepen driving in cold winds, clouds and rain.

In Auckland it’s just 12 degrees with heavy rain making for atrocious driving conditions.  WeatherWatch.co.nz says Auckland will be likely only reach 13 degrees as their high today.

A heavy rain warning is also in place for Auckland City.  WeatherWatch.co.nz head weather analyst Philip Duncan says a narrow band of heavy rain is continuing to feed in across the city.  “It’s like a river or rain with dry conditions either side in Northland and Waikato.  The rain is pouring in from the Hauraki Gulf and across the city and it’s unlikely to let up until tomorrow”.

Much of the North Island is between 10 and 12 degrees at the moment with just a few centres on 14 such as Tauranga, Paeroa and Hamilton.

In the South Island Dunedin has just 4 degrees this hour with Oamaru and Timaru on 5.

WeatherWatch.co.nz says another frontal system will affect the country on Monday, then drier conditions should move in next week.  “It looks as though there will be a breather next week however computer models are now indicating what could be our first significant winter blast for 2010 hitting next weekend” says Mr Duncan.