Home > News > Cold start to the week then easing befor... 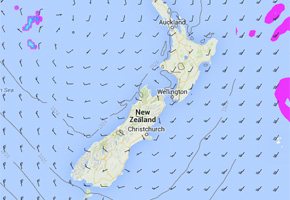 The week ahead is certainly starting off quite cold for some as a low to the east of New Zealand and a high in the Tasman Sea work to churn a cold southerly airflow over the country especially in the South Island. But from there conditions gradually ease on Tuesday and Wednesday before we have a mainly settled day across New Zealand on Thursday. Finally on Friday a low pressure system moves in bringing some rain and showers again but it shouldnâ€™t be as cold as todayâ€™s weather.

For todayâ€™s look on the weather check out this morningâ€™s national forecast here, a chance of frosts overnight for inland areas where skies clear and winds drop away.

On Tuesday we have a cold southwesterly airflow across the country, it will be easing for most gradually however winds along the east coast of the country especially right on coastal areas will be quite strong and gusty during the day with a risk of gales for exposed areas. Banks Peninsula is a good example for that, perhaps the Kaikoura coast and to a slightly lesser extent Otago Peninsula. The Wairarapa coastline gets strong winds during the day too then easing later on.

The West Coast of the South Island, Nelson and Marlborough get the best weather. The Bay Of Plenty is in for a good day once morning showers clear also. Eastern parts of the country get a few showers mainly near the coast, a few snow flurries to 200m to start about Otago and 300m out on Banks Peninsula but then lifting by the end of the day, amounts will be fairly low so while it will be cold snow amounts will be quite minimal. Inland is drier with sunny areas. Overnight it could get quite chilly for inland areas with a risk of frosts.

Heading onto Wednesday a southwesterly airflow continues, winds in the east will have eased. A mix of sunny areas and some cloud for most with any early morning showers for eastern regions clearing, for the west of the North Island expect cloudy spells with the odd shower possible at times most of which clear in the evening. Overnight could be fairly chilly once again especially in the South Island with frosts possible.

Thursday is mostly sunny for the whole country with light winds, westerlies bring some cloud to the West Coast of the South Island however and a few areas north of Taranaki in the west of the North Island.

A low moves onto the South Island on Friday bringing rain or showers to most for a time. The North Island experiences an increasing northwesterly airflow, cloud in the west may generate a light shower or two while in the east temperatures will be warm with some high cloud.