Cold snap to be short lived – high on the way 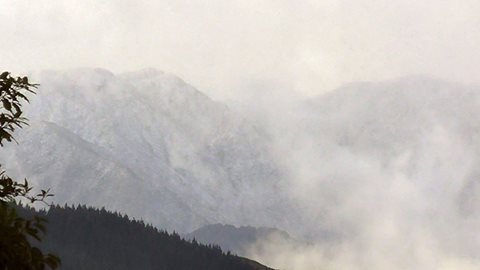 Forecasters say the latest cold snap to hit the country is rare for this time of year.

The snow has arrived early to the lower South Island and the Desert Road – and most parts of the country are in for a cold and blustery start to the day.

It isn’t often that such wintry conditions arrive in the middle of April – as a frigid morning unfolds in the South Island.

This unseasonal cold snap has hit after an extremely dry summer.

Newstalk ZB’s Scarlett Cvitanovich says it was a rough night in Christchurch.

“Cold weather blast hit Christchurch overnight, it was quite a noisy night, there was hail and thunderstorms and even a bit of snow falling in the central city.”

Scarlett Cvitanovich says the temperature in central Christchurch was around one degree at midnight… but the wind chill sent the mercury plummeting to minus-six.

It’s been a noisy and blustery start for the day at the other end of the country in Auckland.

A band of torrential showers is passing over the city with thunder and lightning and a little hail in some areas.

The wind and rain has brought down some trees, mainly in the rural areas of Helensville and Kumeu to the west of Auckland, there’s surface water on some roads – and firefighters say lightning’s set off some alarms.

Conditions are expected to improve significantly later in the day.

The NZTA is warning Southern drivers not to get caught out with black ice this morning.

Southland Manager Peter Robinson says despite better conditions, the messages for people on the work commute are the same.

“Everyone should drive as if the road is icy and snowy even if it looks clear. Reduce speed, particularly approaching corners, and allow plenty of time so there’s no pressure to get to work.”

AA motoring affairs manager Mike Noon says across the country, people need to drive to the conditions and be ready for them to change.

If you were hoping for a bit more of the summer weather we’ve been having, you might be out of luck.

Satellite models show a high is coming tomorrow – but that won’t mean an end to the chilly winter conditions – with the likelihood of frosts increasing as the winds drop.