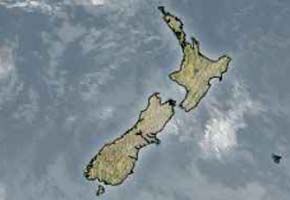 Last night was a cold one in Southland with temperatures getting down to –3 degrees, this due to a high from the Tasman Sea which is beginning to move over the South Island bringing clearing skies. Conversely the warmest place in the country at present is the Bay of Plenty with readings currently sitting on 17 degrees.

The wettest place in the North Island in the 24 hour period till 1pm today was in the Wairarapa with up to 20mm recorded, for the South Island Mount Somers in inland Mid Canterbury recorded the most with 13mm.

Wet weather today is mainly in the form of showers, hanging about the ranges in Buller and Tasman. Also some parts of Marlborough and the Kaikoura Coast.

In the North Island showers are mainly in the east from Wellington up through to Gisborne. Sunny elsewhere otherwise if it’s cloudy near you apart from the aforementioned areas expect it to slowly break as the day goes on.

Yes, a sneaky 6 degree frost! The thaw was quick though compared to August frosts of years ago…