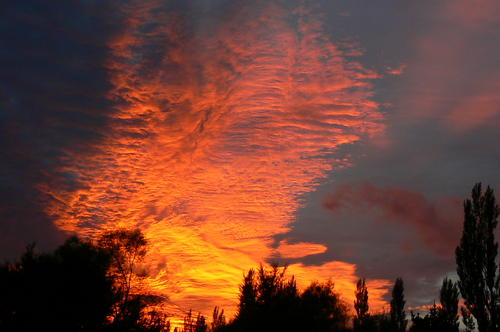 It’s not too often we talk about a cold front warming things up but that’s going to be the case in the lower South Island today following a bitterly cold week.

Overnight lows have been brutal, with at least -minus five recorded yesterday morning in Central Otago and several days of highs in Alexandra only just scraping zero degrees.  Invercargill and other parts of Southland have only faired a bit better.

Now while the cold front does indicate colder air overall is moving in it will actually flush out the bitterly cold weather that has sunk into the Central Otago and Northern Southland valleys.

The extremely cold weather has been due to high air pressure and cloud cover.  Temperatures drop at night, then, like a freezer door being closed, the clouds have trapped the cold in during the day.

The cold front will bring in wind and sunnier spells and a few showers which should see a lift in temperatures during the day but even more so at night.

And with unsettled weather on the way for the next week at least it looks as though the severe frosts may be out of the picture in the short term.

Twizel has had some freezing fog as well, but Tekapo webcam has shown clear pristsine conditions for several days now, at least when I’ve checked.