Cold blast moving in – The Big Picture on Wednesday 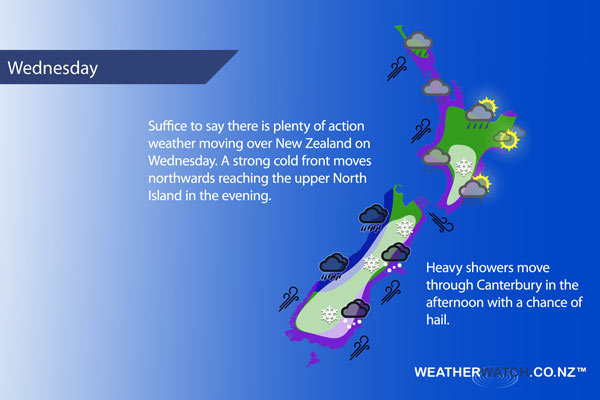 On Wednesday we have a building westerly airflow over New Zealand. A strong cold front moves over the lower South Island during the morning, reaching the upper North Island in the evening.

Mostly cloudy for the west of the North Island, showers at times especially afternoon onwards. Winds tend strong southwest in the evening with gales about coastal areas. Dry along the east coast with some high cloud, a few showers may move through in the evening then becoming more likely overnight as winds tend strong cold southerly.

Strong southwesterly winds gusting to gale especially about coastal areas starting about the lower South Island in the morning then reaching Canterbury in the afternoon.

As showers move through Canterbury in the afternoon they may be heavy with hail.